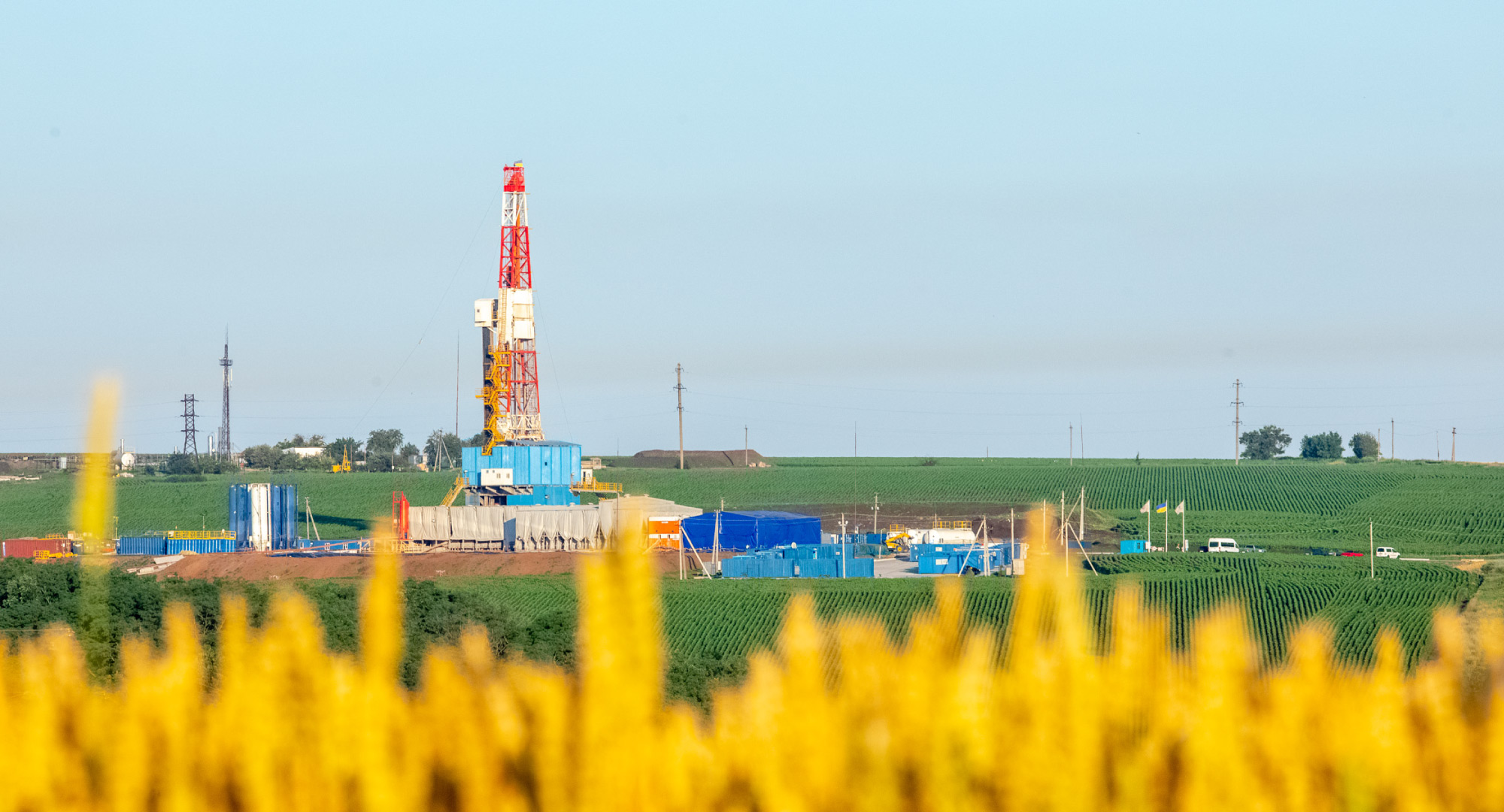 JSC Ukrgasvydobuvannya (Naftogaz Group) reduced gas production by 3% compared to the same period last year. PJSC Ukrnafta along with independent gas producers were able to increase outputs of natural gas by 6% and 8% accordingly.

Thus, the share of state-owned enterprises in the total amount of gas production in September was 74%, independent companies – 26%. 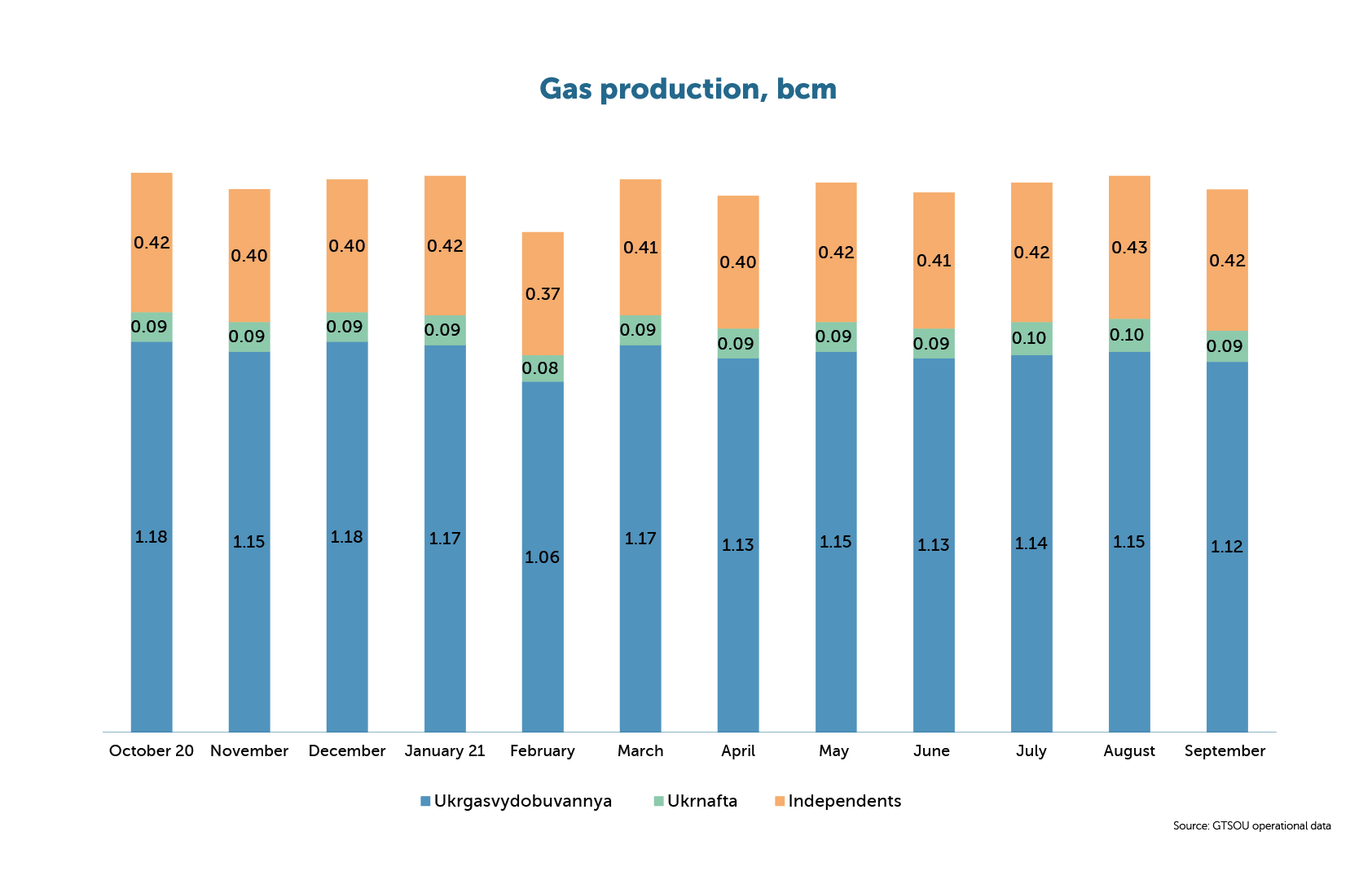 Natural gas prices are rising 6th month in a row. September is distinguished by a record increase, as the price has exceeded $1 000 per 1 000 cm. For the final time, close cost was recorded in March 2018 and amounted to $969 per 1 000 cm. This record was set at the end of the heating season due to the significant deterioration of the weather.

The average cost of natural gas at the TTF hub in September, including the cost of transportation to the Ukrainian border, in September, amounted to UAH 21 895 ($819 per 1 000 cm) net of VAT. It increased by 39% compared to last month.

Among the main reasons for price fluctuations: 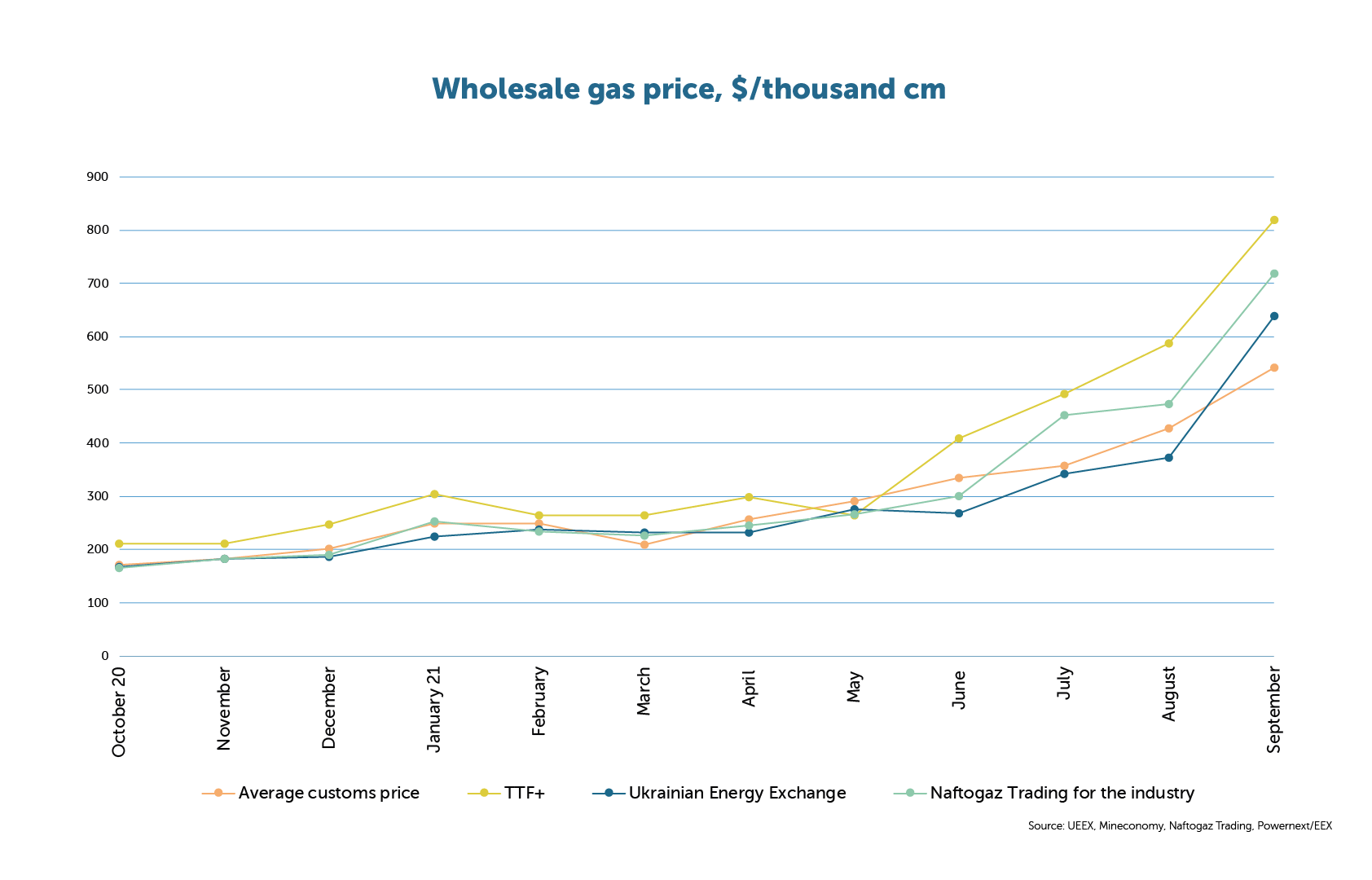 High prices continue to create a shortage of hydrocarbons in the European market. Asia is increasing LNG imports and buying a resource that is consistently more expensive than Europe. On the other hand, the United States' export capacity for LNG is not enough to meet demand, which is holding back pricing at Henry Hub. In particular, reduction of electricity generation due to low wind gusts, as well as unplanned outages due to cooling, which affected the price, indicate the interdependence between the natural gas and electricity markets.
The situation in the world clearly confirms the fact that natural gas remains an essential element of security during the transition to clean energy and zero emissions, and also serves as a tool for balancing electricity markets in most regions.

Price correlations in Ukraine during September continued the trend at European hubs and reflected growth.

The price of the resource of September in Naftogaz Trading for industrial consumers on the 100% prepayment terms increased by 105% compared to the previous month and amounted to UAH 19 191 ($718 per 1 000 cm) net of VAT.

According to the Ministry of Economy, the import of natural gas to the territory of Ukraine in September was carried out at the average price of UAH 25 923 ($970 per 1 000 cm) net of VAT.

According to the Association of Gas Producers of Ukraine, 31 drilling rigs were used in drilling in our country in September. Such a number means a growth compared to the previous year by 9 pcs. (+41%), however, a drop to August 2021 by 4 pcs. (-11%).

Europe has shown a slight increase by 1 pc. (+1%) compared to the previous month. Thus, its overall quantity was 75 pcs., which is less by 5 pcs. (-6%) compared to the same period last year. Italy was the only country where the total number of drilling rigs was reduced by 1 pc. (-50%). On the other flip of a coin, France and Turkey increased capital investment activity equivalent to 1 rig, which means an increase by 100% and 5% accordingly. The rest of the countries remained unchanged. 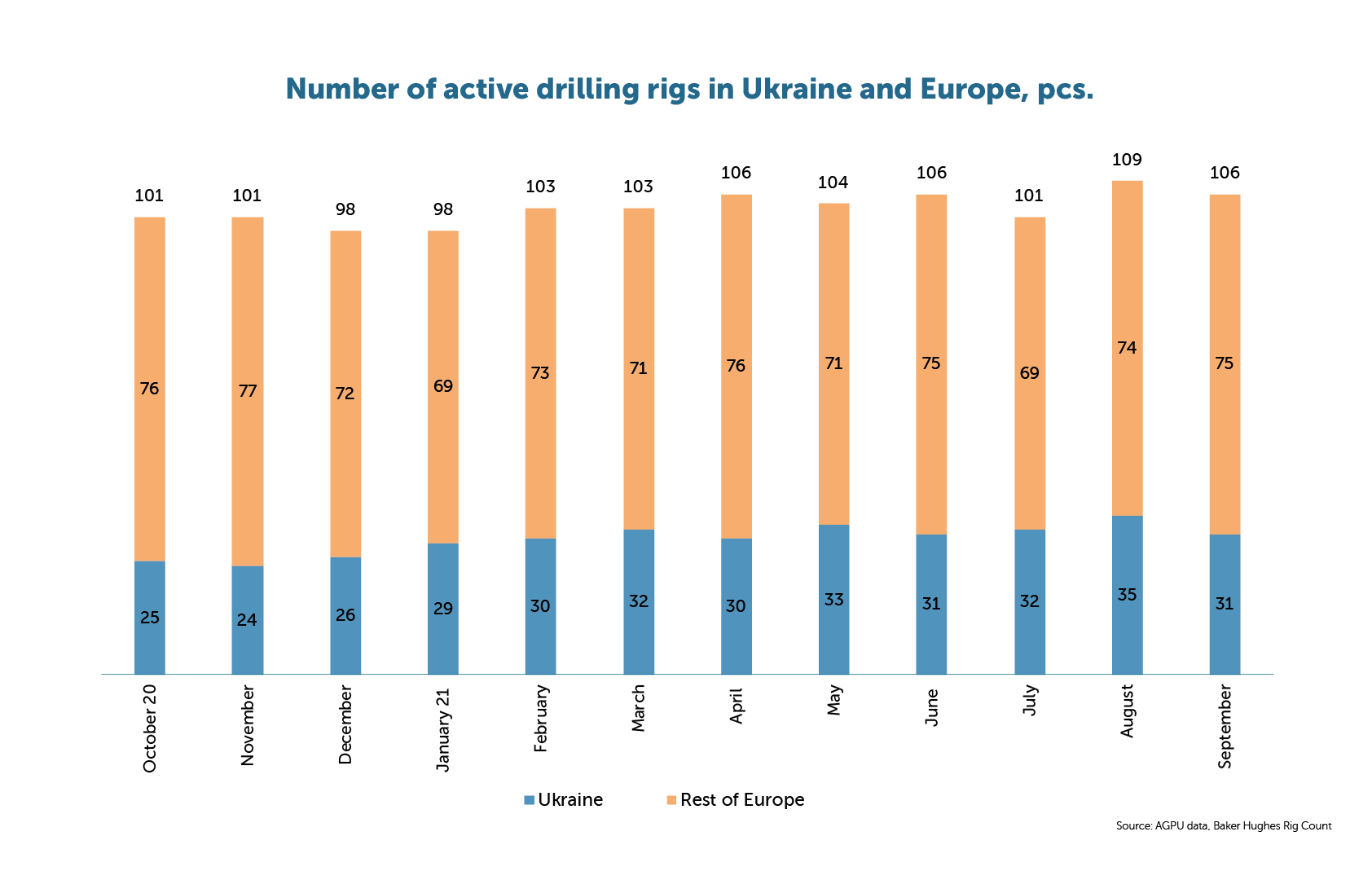 North America has gained significant harm due to recent hurricanes. Thus, the National Oceanic and Atmospheric Administration (NOAA) - the federal agency for meteorological and geodetic research in the United States, has reported 55 cases of oil emissions that are unprecedented over the past 10 years. According to the agency, Hurricane Ida had the greatest impact on offshore drilling.

The number of rigs involved in drilling in Africa continues to grow for the eighth consecutive month. Therefore, their number in the region was increased by 3 pcs. (+4%) to the previous month and by 23 pcs. (+42%) compared to September 2020. The leader of the region in terms of capital investment in the industry - Algeria - increased its volumes by 2 drilling rigs (+8%). Gabon and Libya supported the growth trend by 1 rig or +33% and +8%. Instead, only Cameroon reduced its figures, using 1 drilling rig (-50%). The rest of the countries remained unchanged. 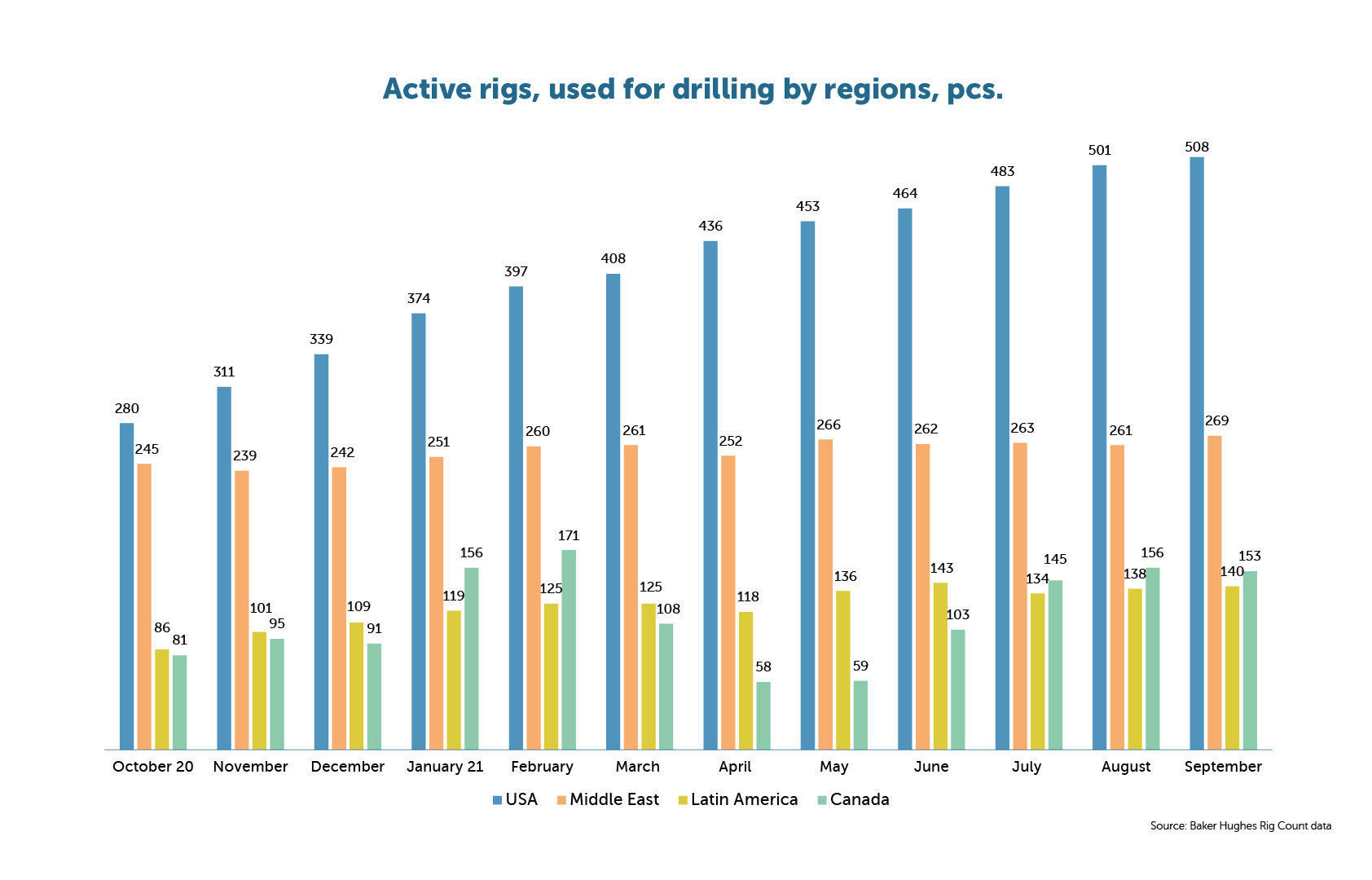 During the event a range of conference sessions devoted to the issues of modern drilling technologie...

On September 16-17, Poltava hosted the VIII International Industry Forum, which brought together lea...