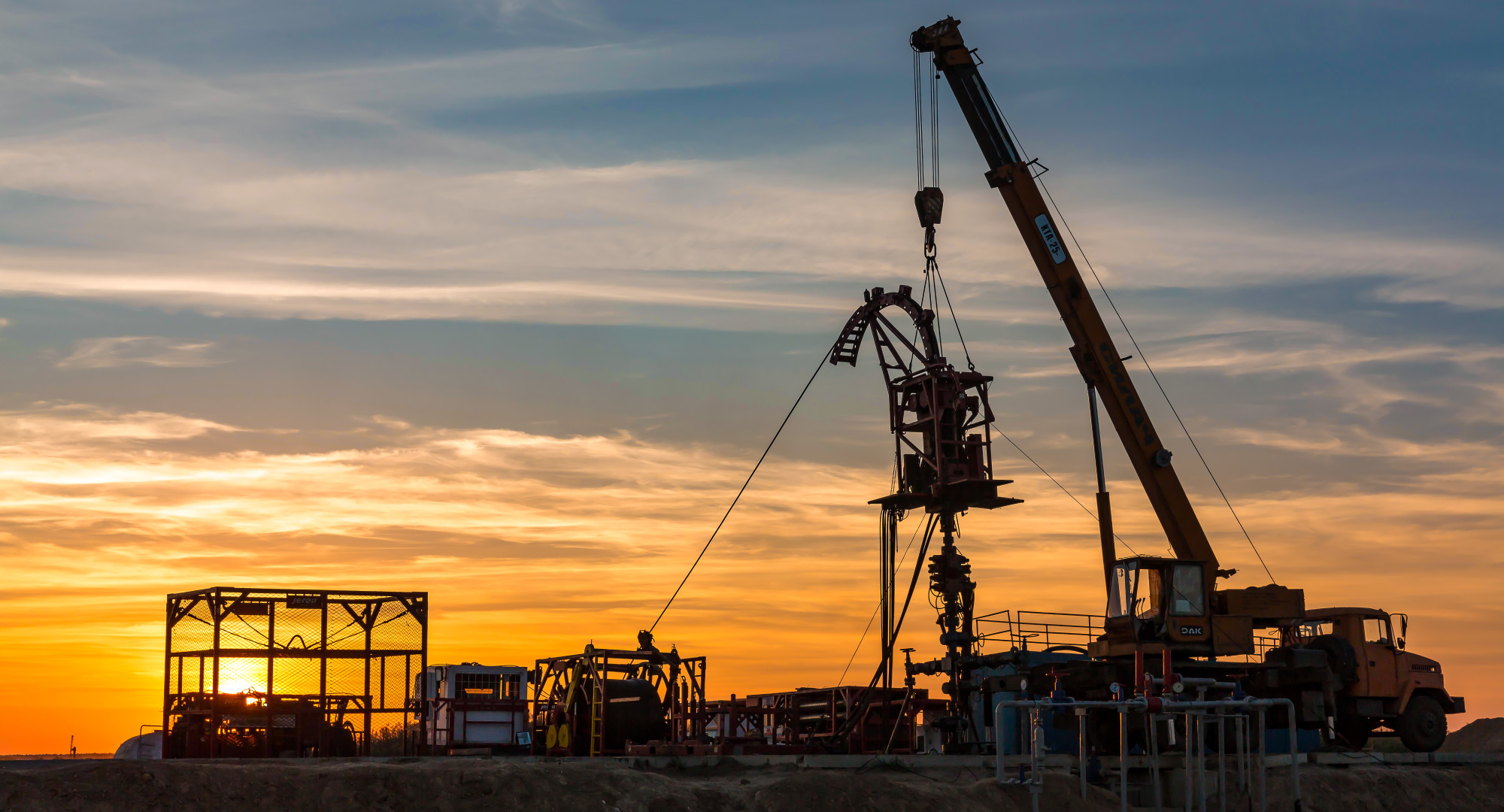 JSC Ukrgasvydobuvannya (Naftogaz Group) reduced natural gas production almost by 2% compared to the same period last year. PJSC Ukrnafta along with independent gas producers keep increasing outputs of natural gas by 7.8% and 7.3% accordingly. Thus, over the past 7 months, the private sector has increased production by 114 million cm of natural gas, and it is forecasting that in 2021 the total production will reach 5 bcm, which will be an absolute record.

The share of state-owned enterprises in the total amount of gas production has not changed significantly since last month and was 74%, independent – 26%. 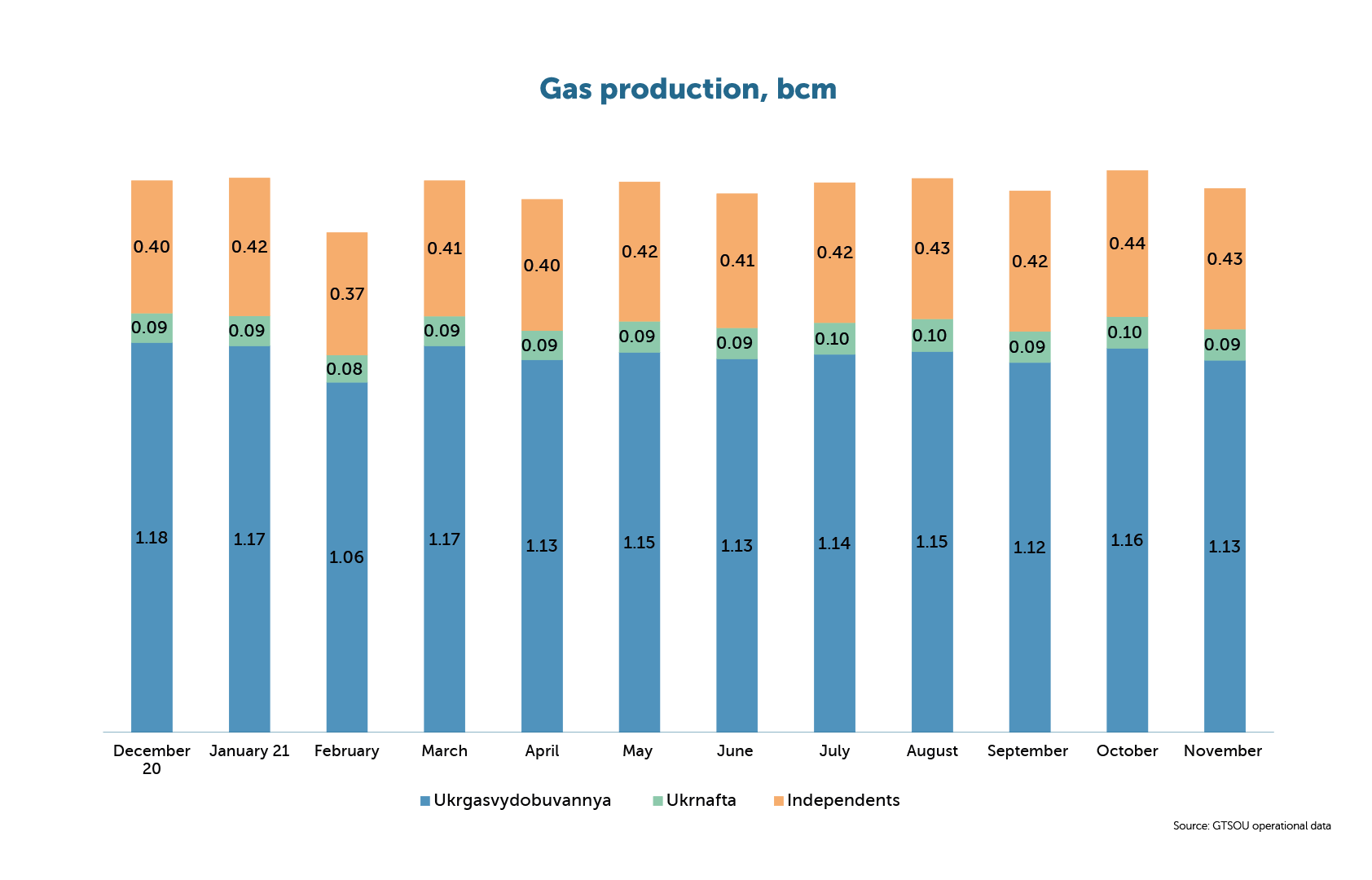 For the first time in the last 9 months, average monthly natural gas prices have fallen.

Among the main reasons for price changes: 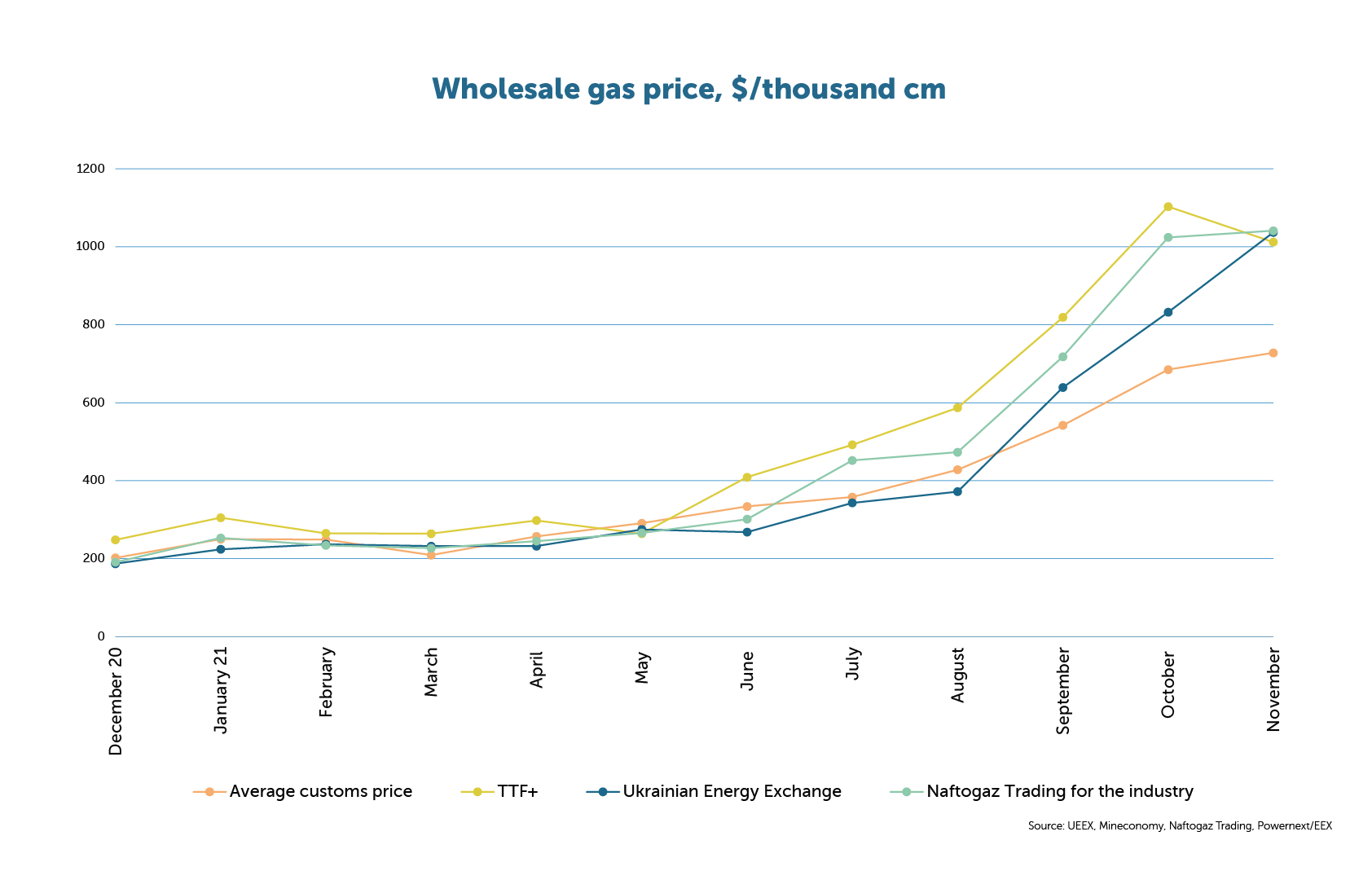 Bearing in mind, that the crisis at the world’s natural gas markets is primarily due to a shortage of resources, the market is monitoring the stages of Nord Stream 2 launch super carefully. As evidence, the sharp changes in prices of natural gas right after new information pops out. Moreover, knowing the fact, that the main characteristic of 20/21 years in instability, specialized organizations are constantly adjusting their forecasts, just because the situation is changing rapidly. For example, on November 16, 2021, the German regulator suspended the certification of Nord Stream 2 AG as the operator of the pipeline due to non-compliance under German law. Bloomberg, announced a possible delay in the certification until May 8. However, due to the crisis in the energy market, the situation may change radically at any time.

The Oxford Institute for Energy Studies has outlined three main scenarios towards the launch of Nord Stream 2, and here they are:

Price correlation in Ukraine during November continues to correlate with European trends.

The price of the resource of November in Naftogaz Trading for industrial consumers on the 100% prepayment terms increase by 2% compared to the previous month and amounted UAH 27 526 ($1 041 per 1 000 cm) net of VAT.

According to the Ministry of Economy, the import of natural gas to the territory of Ukraine in November was carried out at the average price of UAH 19 262 ($728 per 1 000 cm) net of VAT, which is more by 6% compared to the previous month.

According to the Association of Gas Producers of Ukraine, 39 drilling rigs were used in drilling in our country during November. This is more than 15 pcs. (+63%) compared to the same period last year and by 7 pcs. (+22%) compared to the previous month.

In Europe, 76 pcs. were used in production. This is an increase in drilling volumes using an additional 3 pcs. (+4%) compared to the previous month, but less by 1 pc. (-1%) by November 2020. Despite the fact, that France and Norway have reduced the number of active drilling rigs by 1 pc. (-50% and -6%), the rest of the countries offset this with their own growth. Among such countries: Italy by 2 pcs., Turkey by 2 pcs. (+9%), the offshore part of Great Britain by 1 pc. (+14%). The rest of the countries remained unchanged. 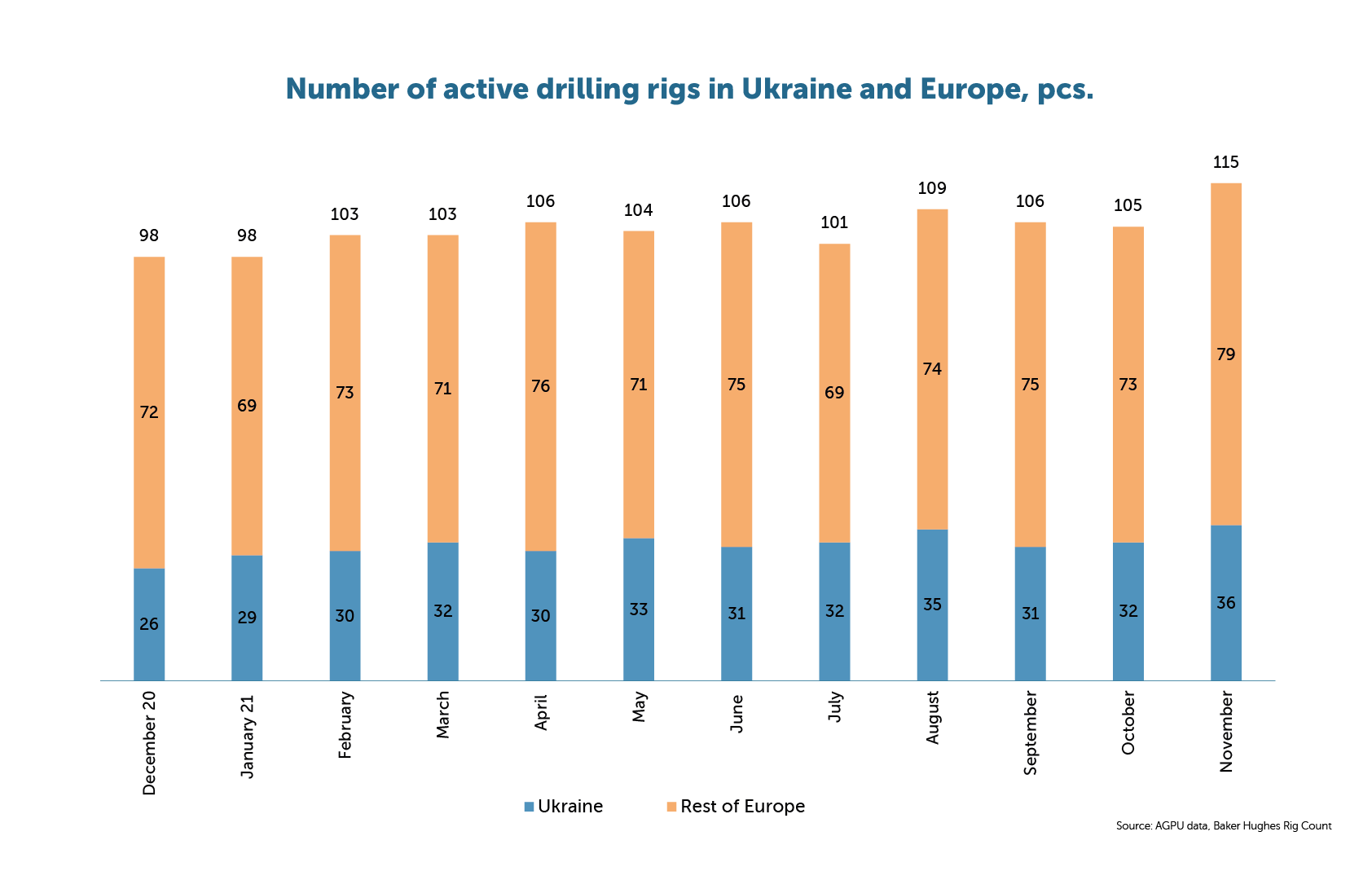 The total number of capital investments equivalent to drilling rigs in Africa during November increased by 5 pcs. (+6%), compared to the previous month. That is also an increase to November 2020 by 21 pcs. (+33%). Hence, the total number was 84 pcs. Notwithstanding the fact, that most countries remained unchanged in their numbers or increased their performance – Nigeria was the only country with a slight reduction of rigs in by 2 pcs. (-22%). Among the countries that have used additional rigs: Algeria by 2 pcs. (+7%), Angola by 2 pcs. (+50%), Cameroon by 2 pcs, and Gabon by 1 pc. (+33%). 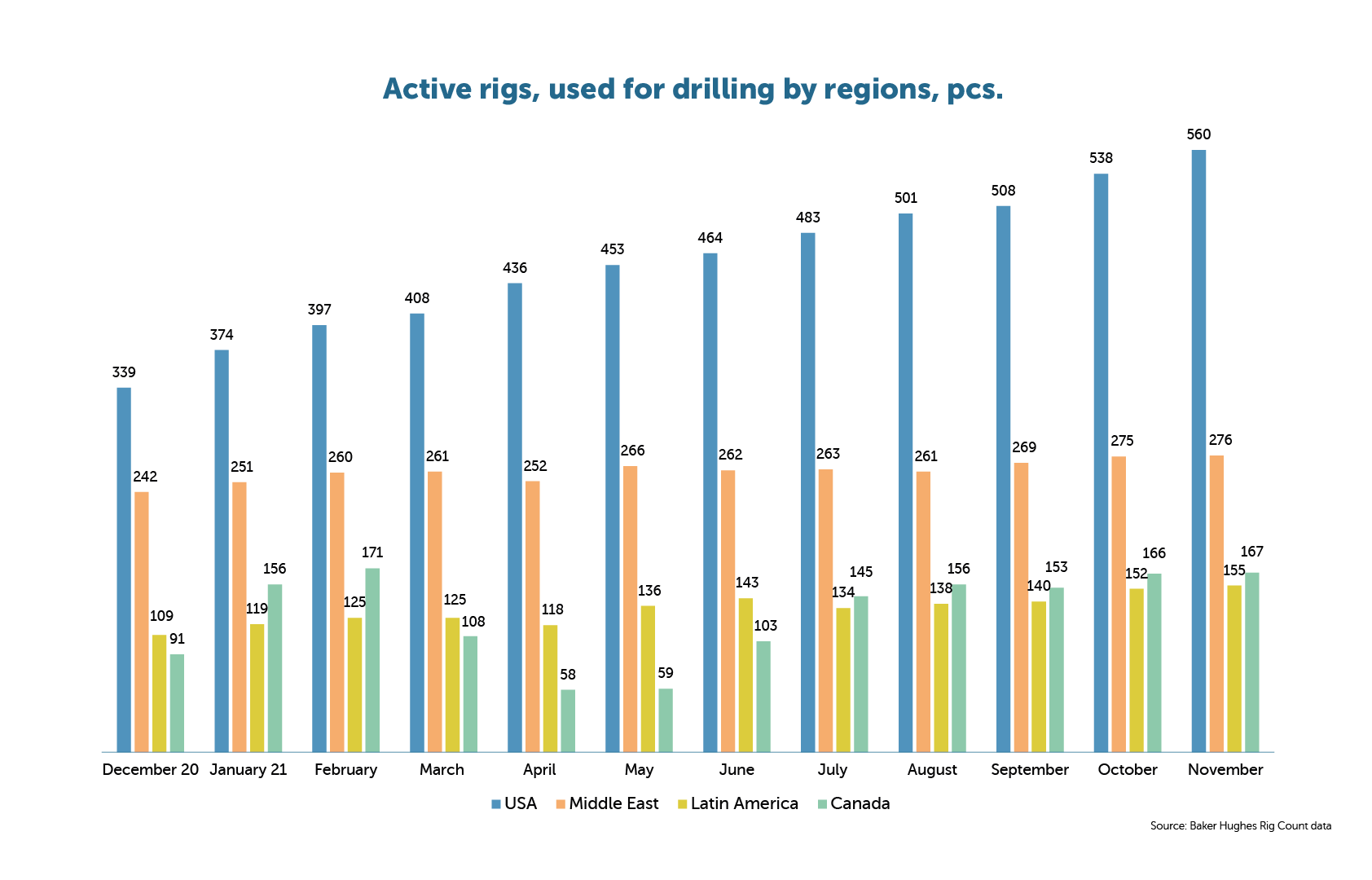