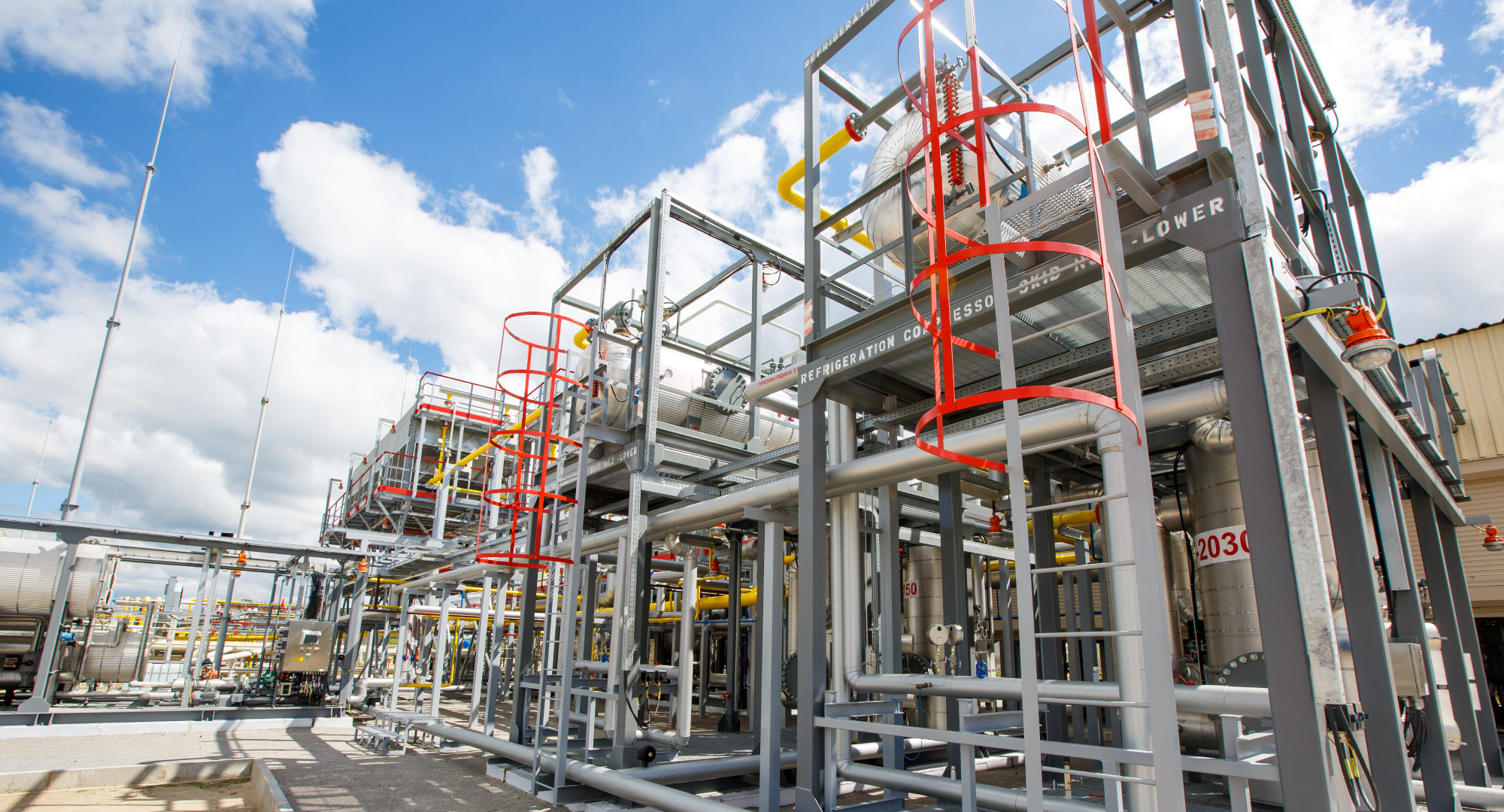 Altogether, Ukraine produced 18.56 bcm of its own gas during January-November of current year. It is 1.92% less compared to the preceding period last year. 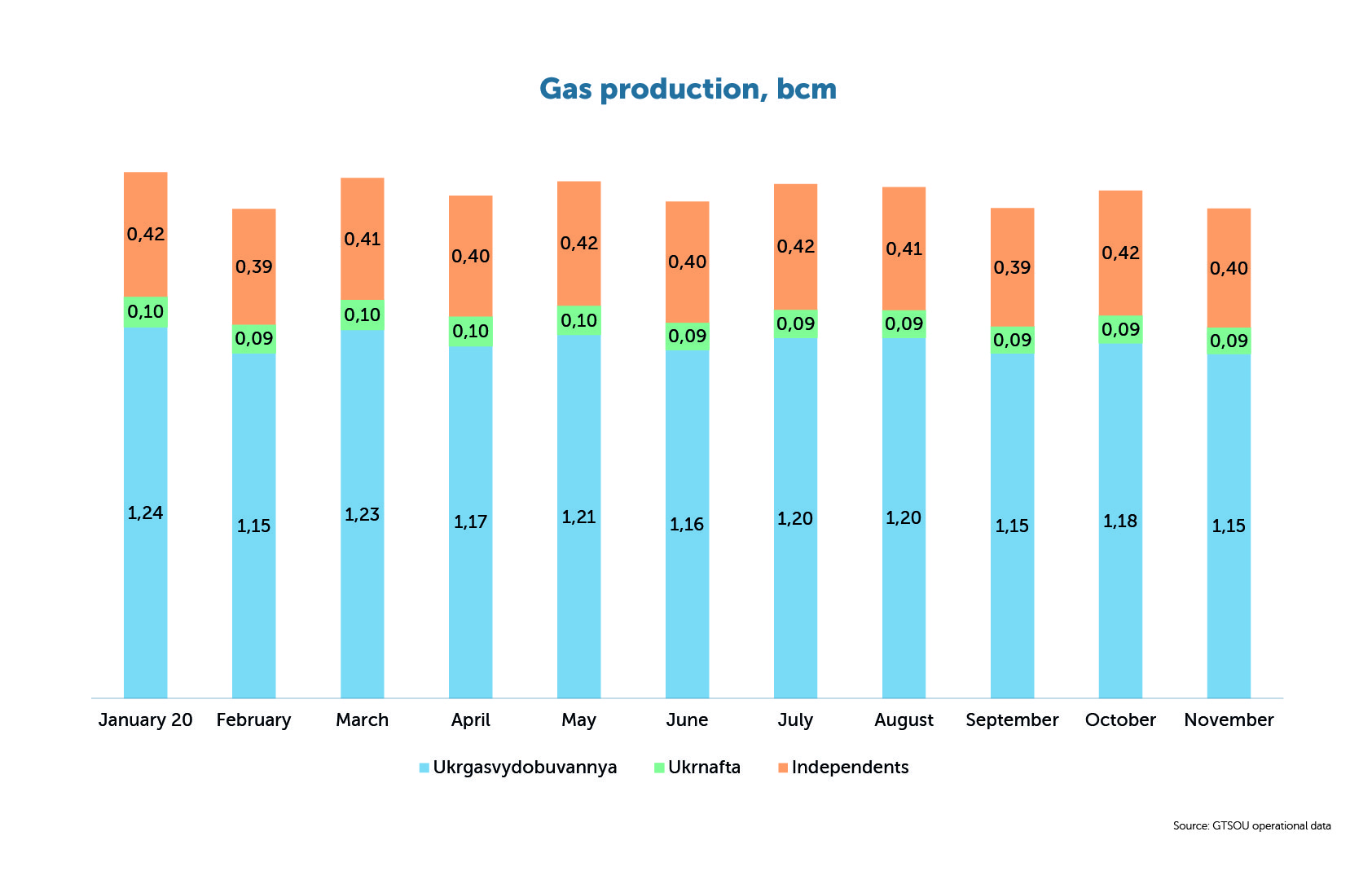 The second-to-last month of the year brings positive signals regards mild growth in gas production in the world. Surely, in the absence of another wave of COVID-19, demand for hydrocarbons will grow in the following years, however it is a bit early to expect a rapid comeback to anti-crisis performance. As the industry recovers, private producers will exercise self-restraint and precision, spending less expenditures on risky projects, highlighting stable and predictable ones.

Taking to account the LNG market, leading analyzing company Wood Mackenzie notes the inevitable transformation of long-term contracts that have attracted funders, majors and investment. In consideration of two waves of a sharp downturn in prices for hydrocarbons in two consecutive years, pandemic and following economic crisis, customers in Asia need more flexibility and reject further compromises about contracting. The projected long-term growth in consumption is encouraged by India and China that engage suppliers to attract unconventional sources of the capital and to seek new approaches of assessment and realization of hydrocarbons.
In the short term, majors intend to keep less risky projects in terms of demand and prices because, despite the variability of a region-specific risks, accelerating decarbonization preoccupies.

Thus, due to the minimum margin and maximum efforts to minimize losses, majors choose stable and predictable projects instead of risky and doubtful ones.

Traditionally, we can see trader’s calm and patience at the beginning of the month. During the first week, prices on natural gas generally rose and the lowest indices occurred on 3rd of November. At this date, the price was the cheapest as of week and amounted 13.11 EUR/MWh ($164). The highest indicator at the beginning of the month was during the trading day on 6th of November, hence, the price was 14.40 EUR/MWh ($180). Such volatility is due to excessive supply during the period of stable consumption and regular cooling.
In the middle of the month prices were stable and ranged of 13.35-14.18 EUR/MWh ($167-177). Later, stability was replaced by a five-day drop to 12.61 EUR/MWh ($157), an 11% reduction since the middle of the third week.

The highest rates in November were recorded during the last week of the month. Thus, cost on hydrocarbons increased and reached a monthly peal of 14.57 EUR/MWh ($182), an 16% more than the minimum price for the whole month. 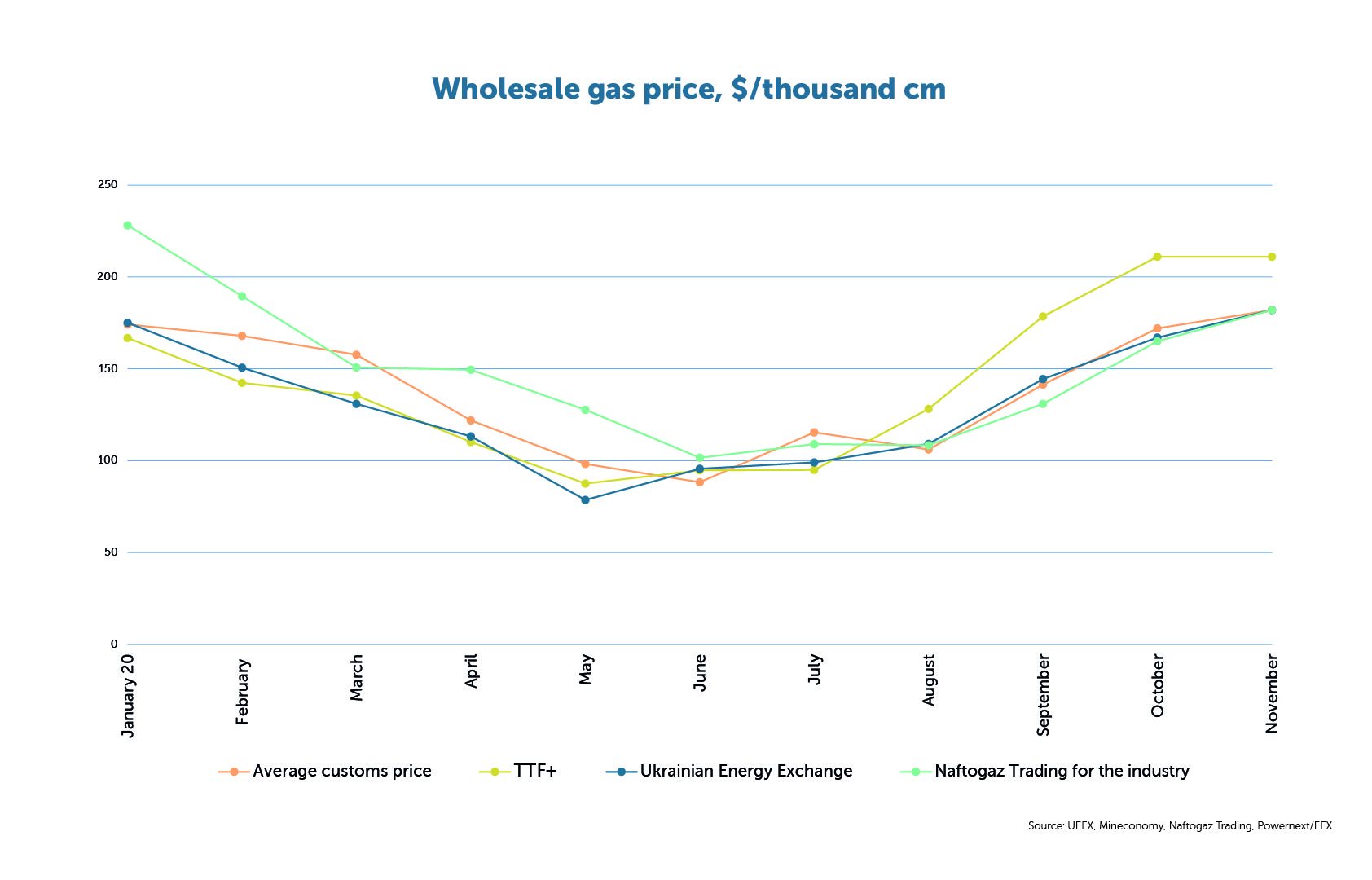 Among the main reasons, that directly affected pricing:

Positive:
- Positive news about the effectiveness of Pfizer consequently increased demand
- Strikes at the Nyhamna gas processing plant, which became a prerequisite for reducing imports

Price on hydrocarbons in Ukraine completely pursued the European hubs’ rise and a seasonal increase in demand. Resembling to the situation in Europe, traders follow a wait-and-see strategy and form main agreements regard resource purchase closer to the middle of the month.
According to the results of e-trading on UEEX in 100% prepayment terms, the average price on natural gas in November was UAH 5143 ($182) per thousand cubic meters, which is 9% more than in October.

The price of the resource of November in Naftogaz Trading for industrial consumers in 100% prepayment terms increased by 10% compared to the previous month and amounted UAH 5.140 ($182) per thousand cubic meters net of VAT.
According to the Mineconomy data, the average customs price of imported gas to Ukraine was 5162 UAH ($182), that is 6% more compared to the previous month.

According to the Association of Gas Producers of Ukraine, 24 drilling rigs were used in Ukraine during November. Our country continues perform under the situation of stagnation and small reduction, due to the inability of companies to drill new wells at present low prices.
In the face of seasonal volatility, Europe looks stable, but with the same stagnation features. In total, 77 drilling rigs were involved in drilling here.

Norway is the only country with the largest monthly increase in 4 drilling rigs and currently has 19 directly involved in drilling. The country predicts a further increase in amounts of oil and gas production and a downturn in terms of production of condensate and NGL. One of the factors underlying the forecast was the licensing round in the Norwegian continental shelf APA 2020, which resulted in 33 applications from companies planning to operate in the field of E&P. Among them: Vår Energi AS, Wintershall DEA Norge AS, ConocoPhillips Skandinavia AS, Equinor Energy AS and others. The preservation of investment projects and the implementation of important fiscal and operational tools for the industry, will be a stabilizing step that is needed by the sector and the country. 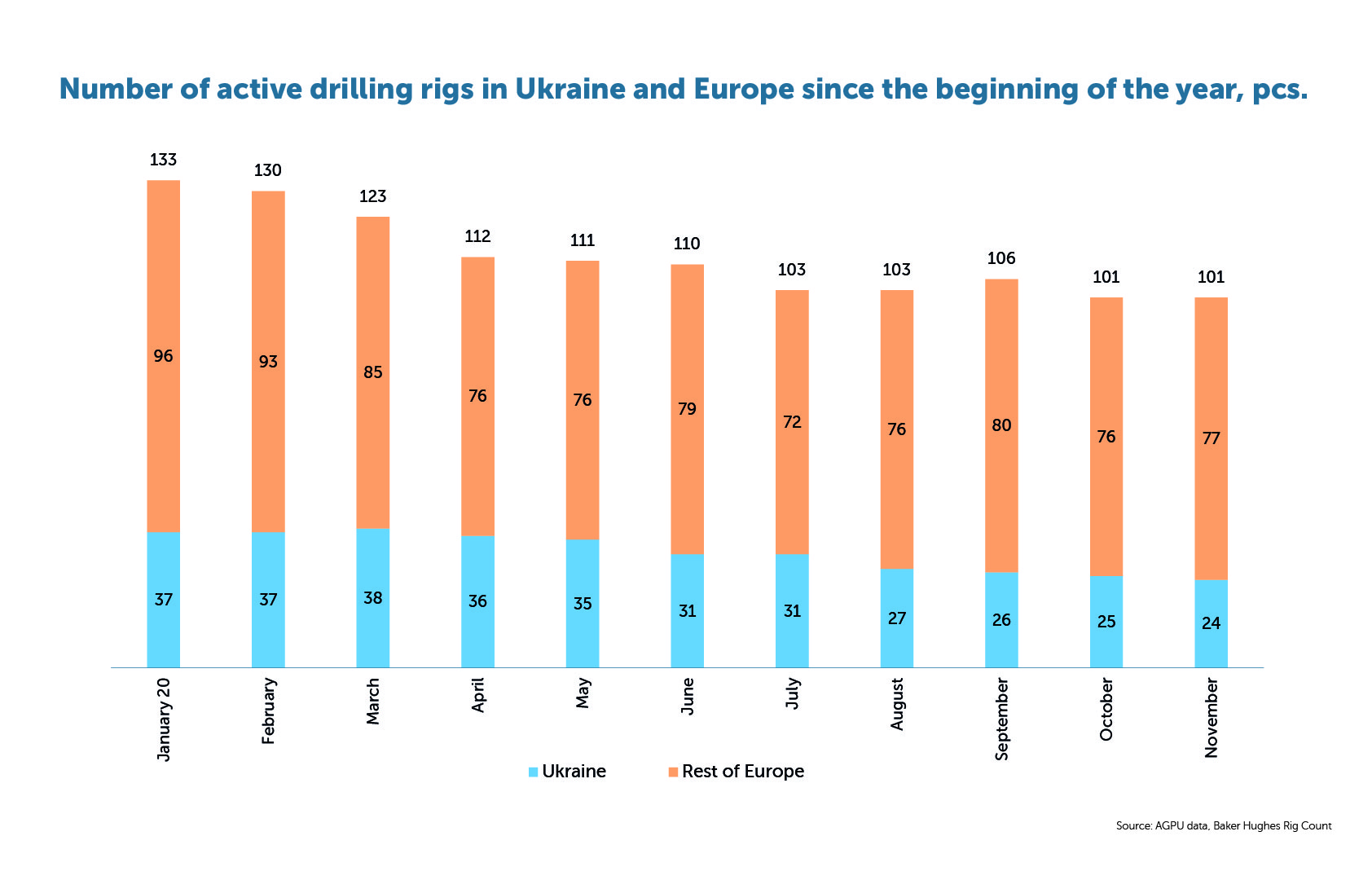 United Kingdom demonstrates one rig reduction and in result, only 7 drilling rigs were used at offshore. It is important to mention, that after 5-month identity over the past two months, the final numbers have doubled.

Turkey supported the tendency and was the last country that showed a reduction this month. As a result, reducing the number of active drilling rigs by 3 per month and consequently came back to the numbers of early 2019.

Croatia, Hungary, Iceland, Italy, Netherlands, Poland, Romania, Serbia, Montenegro and Portugal were stable, where were none recorded variations. It is important to refer, that after an 8-year pause in drilling, Portugal resumes operations for the second month in a row with 1 drilling rig.

France on the result, became the second country that grew together with Norway. Hence, the country used an additional drilling rig and as a result has 2 pcs.

According to Baker Hughes Rig Count, the total number of active drilling rigs in the world at the end of November amounted to 1,075 pcs., which is 33 pcs. more than in October and less than 967 pcs. compared to the same period last year (2,042 pcs.).

After the biggest drop since the beginning of the year, even the North American mastodons in the United States and Canada have showed a downturn by -62% and -30% respectively (compared to November 2019), they finally began to increase the number of drilling rigs involved in the production of new wells. A more pleasant price situation since the times of catastrophically low prices in May makes it possible to take more and more steps facing successful development. According to the results of November, the United States has an average of 311 drilling rigs, and Canada - 95. The lion's share (over 90%) are horizontal drilling rigs. 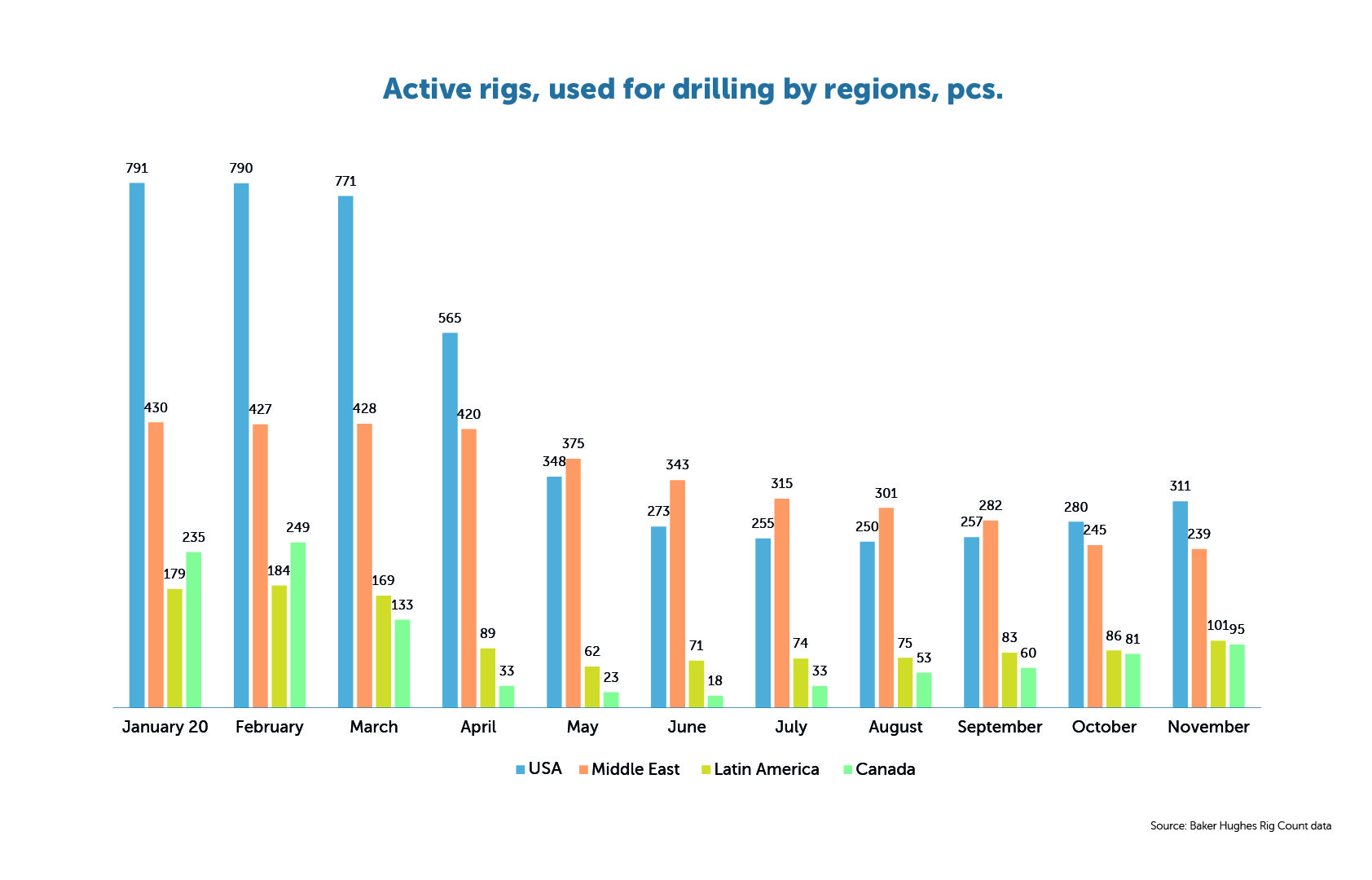 None of the Latin American countries has reduced the number of active drilling rigs. On the contrary, all of them except Guyana have increased investment in drilling. Among the leaders - Argentina, which during the moth demonstrates an increase by 5 pcs. (+ 24%). The total number of active drilling rigs in the region amounted to 101 pcs., which is 15 more than in October (17%).
The situation in the Middle East has not changed much, but is different for each country. The downturn was recorded in: Egypt (-4 pcs.), Oman (-2 pcs.), Saudi Arabia (-10 pcs.), Where the last showed a decrease since the beginning of the year by 51 rigs, or 46%. Countries that, on the contrary, increased their own indicators were Pakistan (+2), Qatar (+3) and the UAE (Abu Dhabi +1). Other players showed neither an increase nor a decrease.

Thus, as a result of the survey, it can be stated that most mining countries having a deep look on the price situation at the world market and keep the number of active drilling rigs at the same level.

The reason for the increase in drilling is that in the last quarter, operators are spending the balance of capital investments planned for 2020.