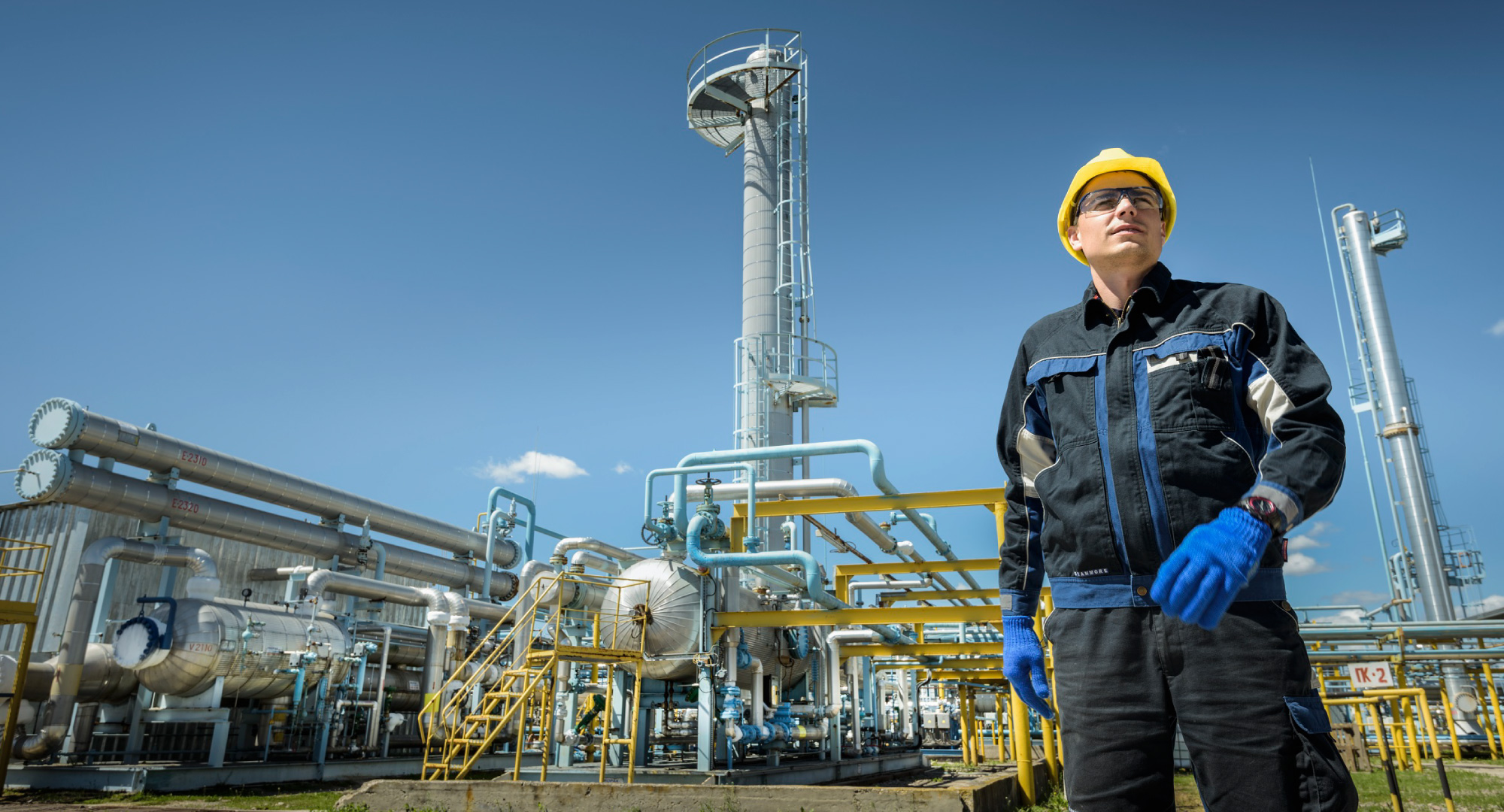 Hence, the share of state-owned enterprises in the total amount of gas production in March was 75.6%, independent enterprises - 24.4%. 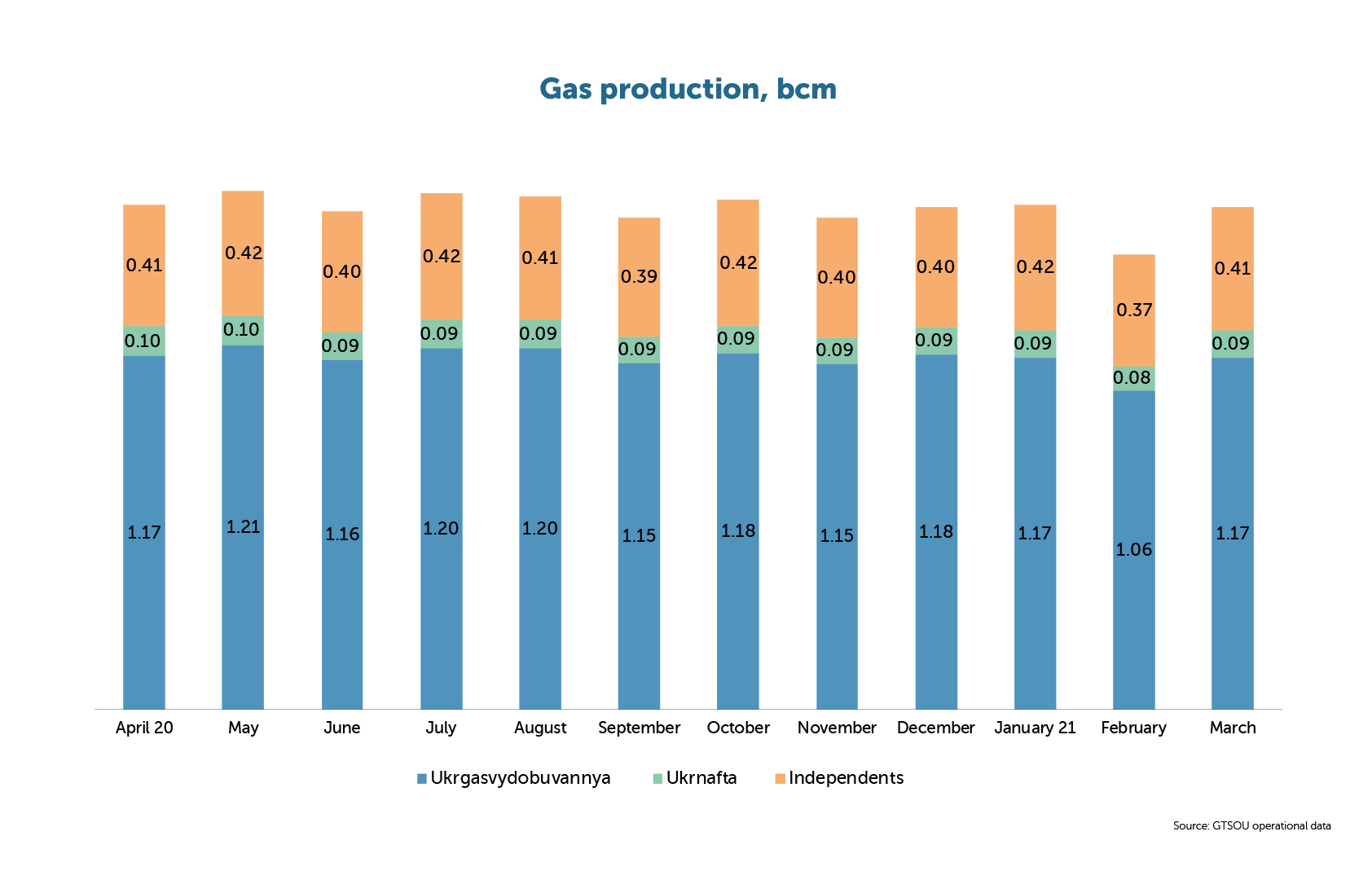 Eventually, the average price at the TTF hub, including the cost of transportation to Ukrainian border, amounted to UAH 7339 ($264 per 1000 m3) excluding VAT. It decreased by almost 1% compared to February.

Among the main reasons that had a positive influence on pricing: colder than traditional temperatures in Europe, reduced LNG supplies due to the blockage of the Suez Canal, disruptions in gas supplies from Norway, reduced stocks of European underground storage facilities and increased CO2 emissions. Negative preconditions, in turn, were: normalization of LNG supplies within a month and resumption of electricity production using renewable sources. 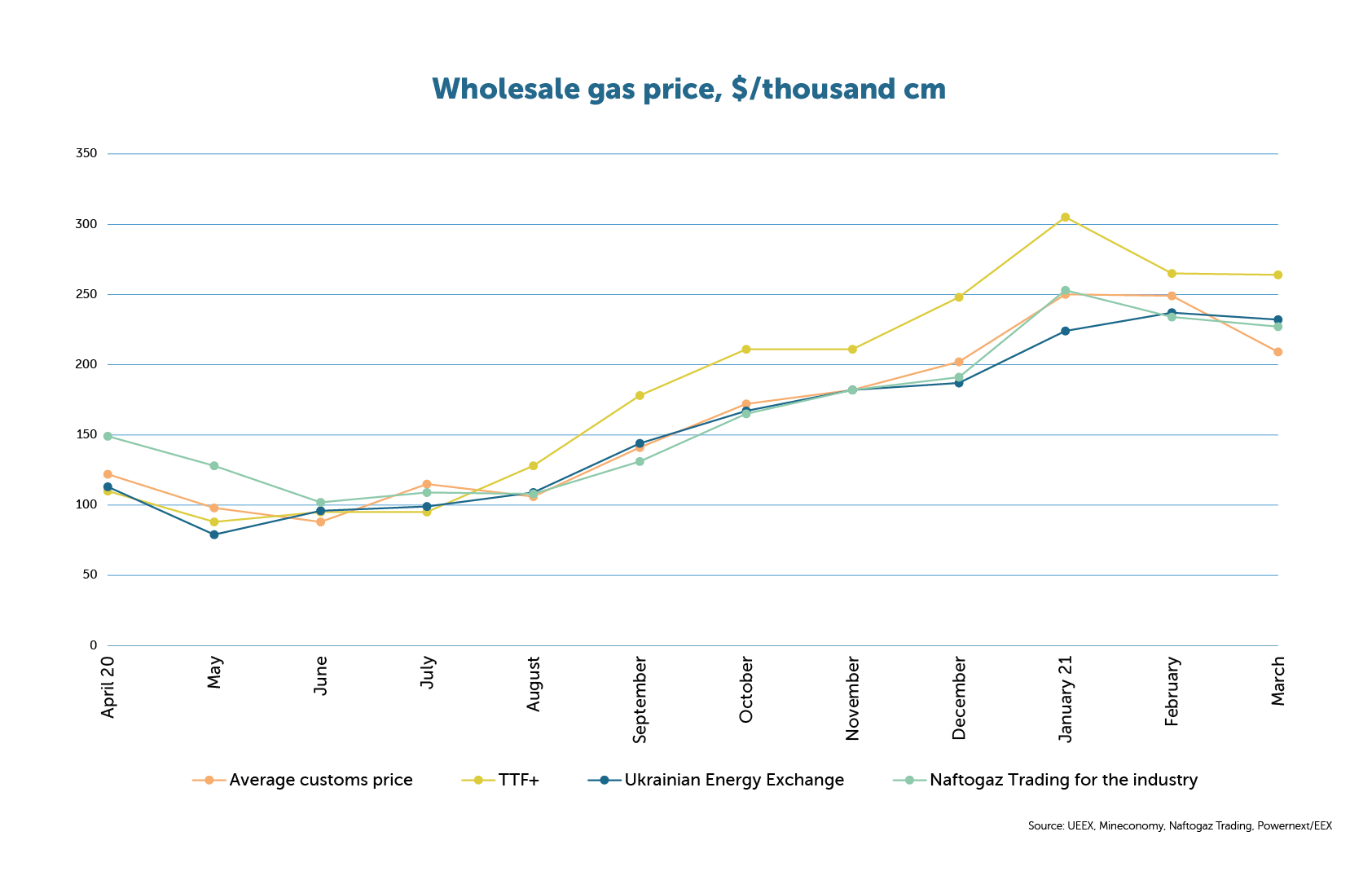 International Energy Agency (IEA), an autonomous international body within the Organization for Economic Cooperation and Development (OECD), emphasizes that although there are upcoming changes in the world today in terms of traditional fuel use, the situation in some countries is far from unambiguous.

The IEA notes that the demand for the use of natural gas to generate electricity in some regions may be limited until the end of 2021. According to the Agency, the growing share of renewable energy sources in the global energy sector will have the greatest impact. However, Asian markets are in contrast, demonstrating that a rapid transition to natural gas substitution is not yet to be expected. The Agency draws attention to the creation and promotion of a liquid global gas market, noting the growth of LNG, which was traded on a spot and short-term basis during the crisis of 2020.

Hence, according to the results of e-trading on UEEX in 100% prepayment terms, the weighted average price in February amounted to UAH 6461 ($232) per 1000 m3 net of VAT, which is 2.2% less than the previous month and by 87% more compared to the same period last year.

The price of the resource of March in Naftogaz Trading for industrial consumers on the 100% prepayment terms decreased by 3% compared to the previous month and amounted to UAH 6303 ($227) per 1000 m3 net of VAT.

According to the Ministry of Economy, the import of natural gas to the territory of Ukraine in March was carried out at the average price of UAH 5821 ($209) per 1000 m3 net of VAT, which is 16% less than in the previous month.

According to the Association of Gas Producers of Ukraine, 32 drilling rigs were used in drilling in our country during March, which is 2 pcs. (+7%) more than in February.

In Europe, 71 active drilling rigs were used in drilling, which is 2 pcs. (-3%) less than in the previous month. Countries that showed a decrease: Norway (4 pcs. or -22%), Serbia and Montenegro (1 pc. or -50%). Turkey, on the other hand, managed to improve its performance by 3 pcs. (+18%). As a result, in March, it had 20 drilling rigs involved, which means leadership in terms of capital investment activities in the industry in Europe. The rest of the countries remained unchanged. 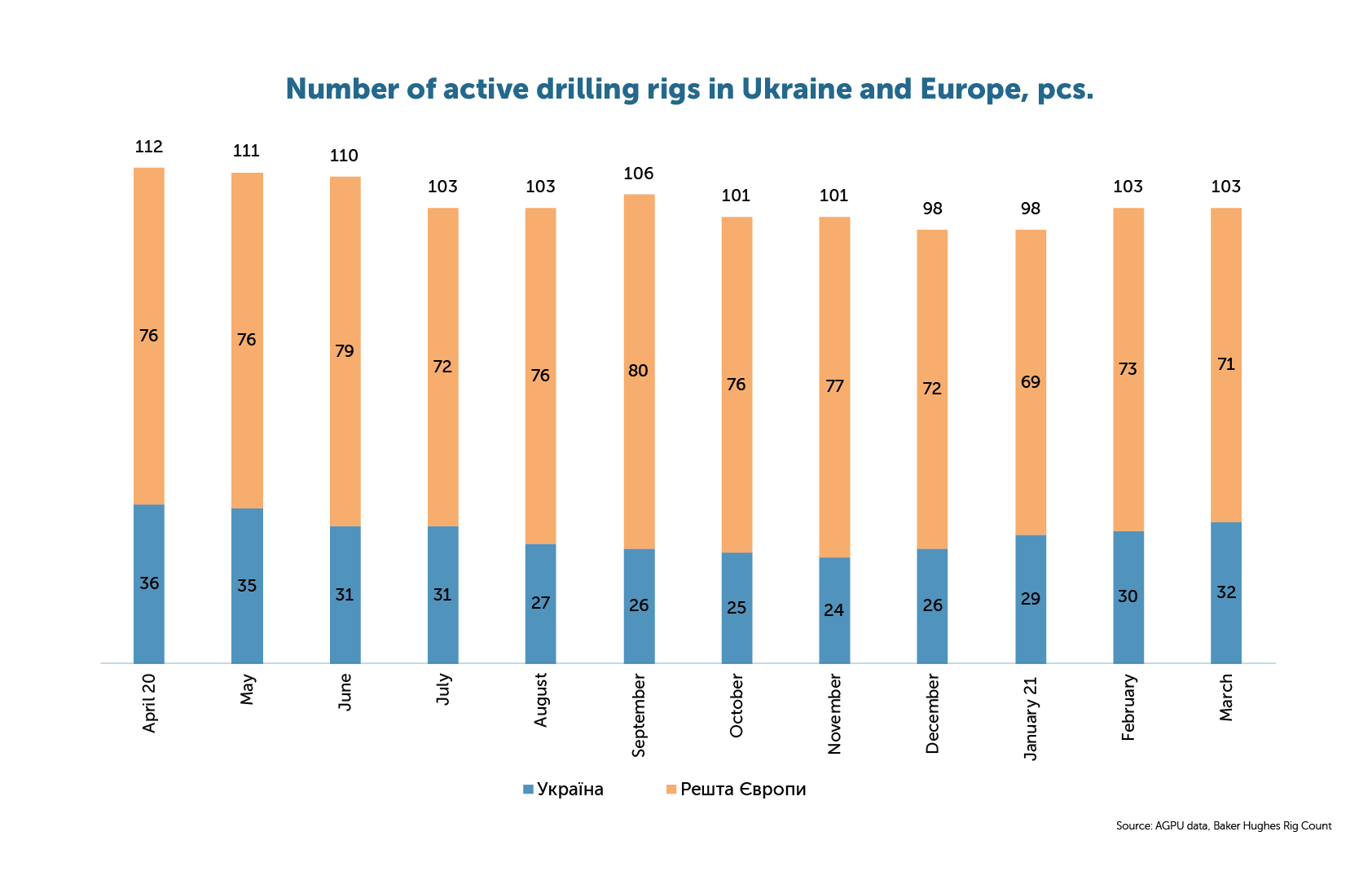 The recent Statement of United States President Joe Biden, as well as the seasonal halt due to weather conditions, remain the main reasons for the reduction in drilling in North America. Otherwise, the United States continues to grow, however, it is slightly lower than expected. In March, 408 drilling rigs were used in the country, which is 11 pcs. (+3%) more than in February, but less by 363 pcs. (-47%) than the same period last year. Horizontal drilling was carried out using 369 pcs. (+4%), vertical - 24 pcs. (+5%), and direct - 15 pcs. (-14%). 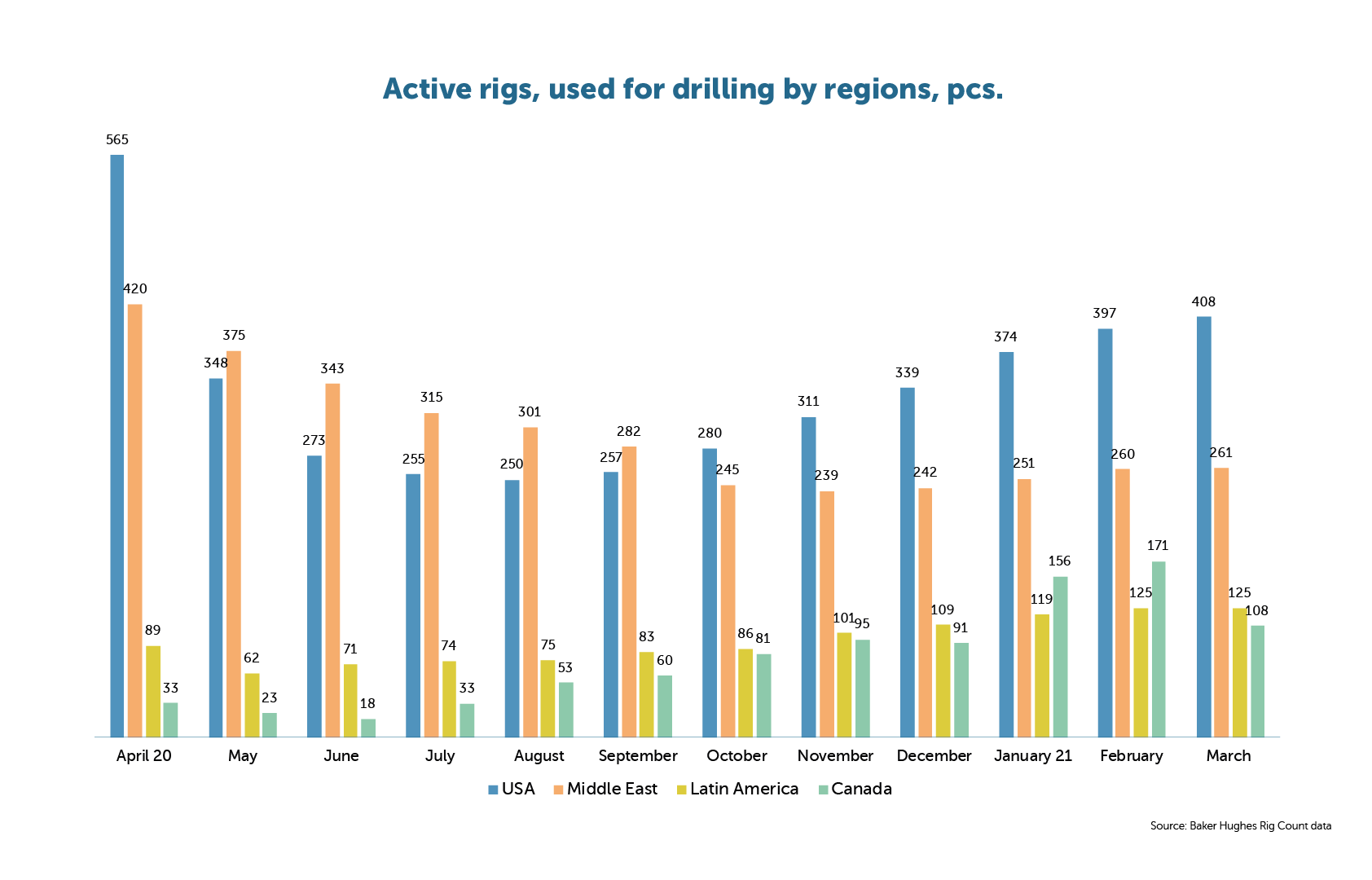 Although, Latin American countries have been showing fluctuations for more than a month period, this has not affected the total number of active drilling rigs in the region. Argentina, Brazil, Ecuador and Peru supported growth, equally increasing capital investment activities in the industry by 1 drilling rig, and showing an interesting gradation in percentage terms, respectively, namely +3%, +13%, +25% and +100% compared to February, 2021. In contrast, the countries where the decrease was recorded: Chile by 1 pc. (-50%), Colombia for 1 pc. (-50%), Mexico 2 pcs. (-4%). Each other country of the region remained unchanged.

The whole world has high hopes for the resumption of business activity due to the reducing impact of the COVID-19 crisis in 2021. However, at the beginning of the year, a new wave of the pandemic forced the use of the lockdown mechanisms, and world agencies form new, unattractive forecasts. Such situation requires the most professional level of restraint and risk management, both at the level of companies and countries.