Ukraine produced 1.68 bcm of natural gas in January, which is 0.5% less than in December and 4.3 % less that the same period last year. 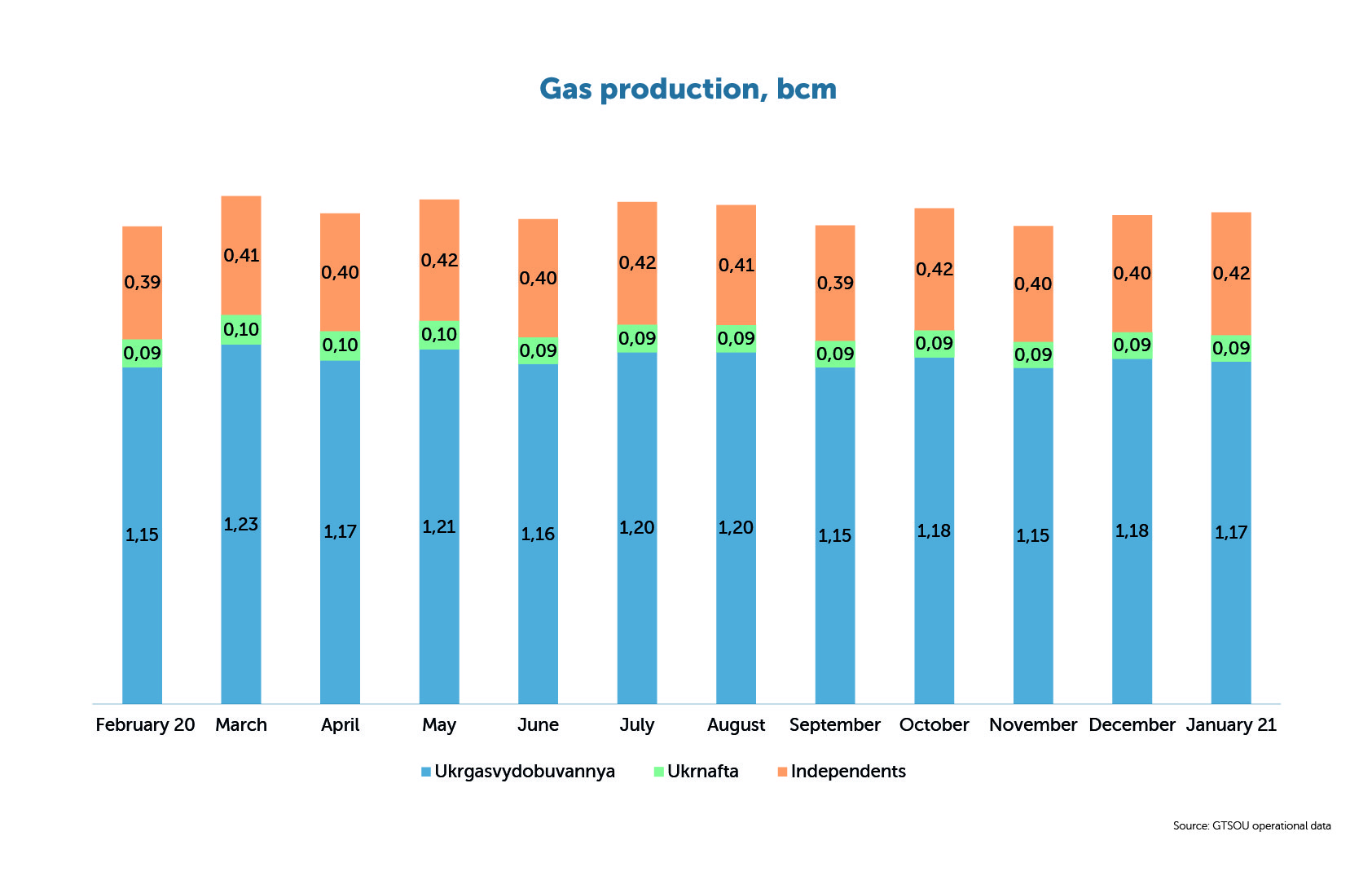 The beginning of 2021 demonstrates a moderate increase in gas production in the world. Such scenario facilitated by the intensification of production, workovers and related works, as well as the development of new oil and gas fields, including those that contain unconventional hydrocarbon deposits.

Among the main reasons for the rise in prices during the month were:

At the same time, further price declines in Asia, warming in Europe and stable supplies from Norway were prerequisites for lower quotations. 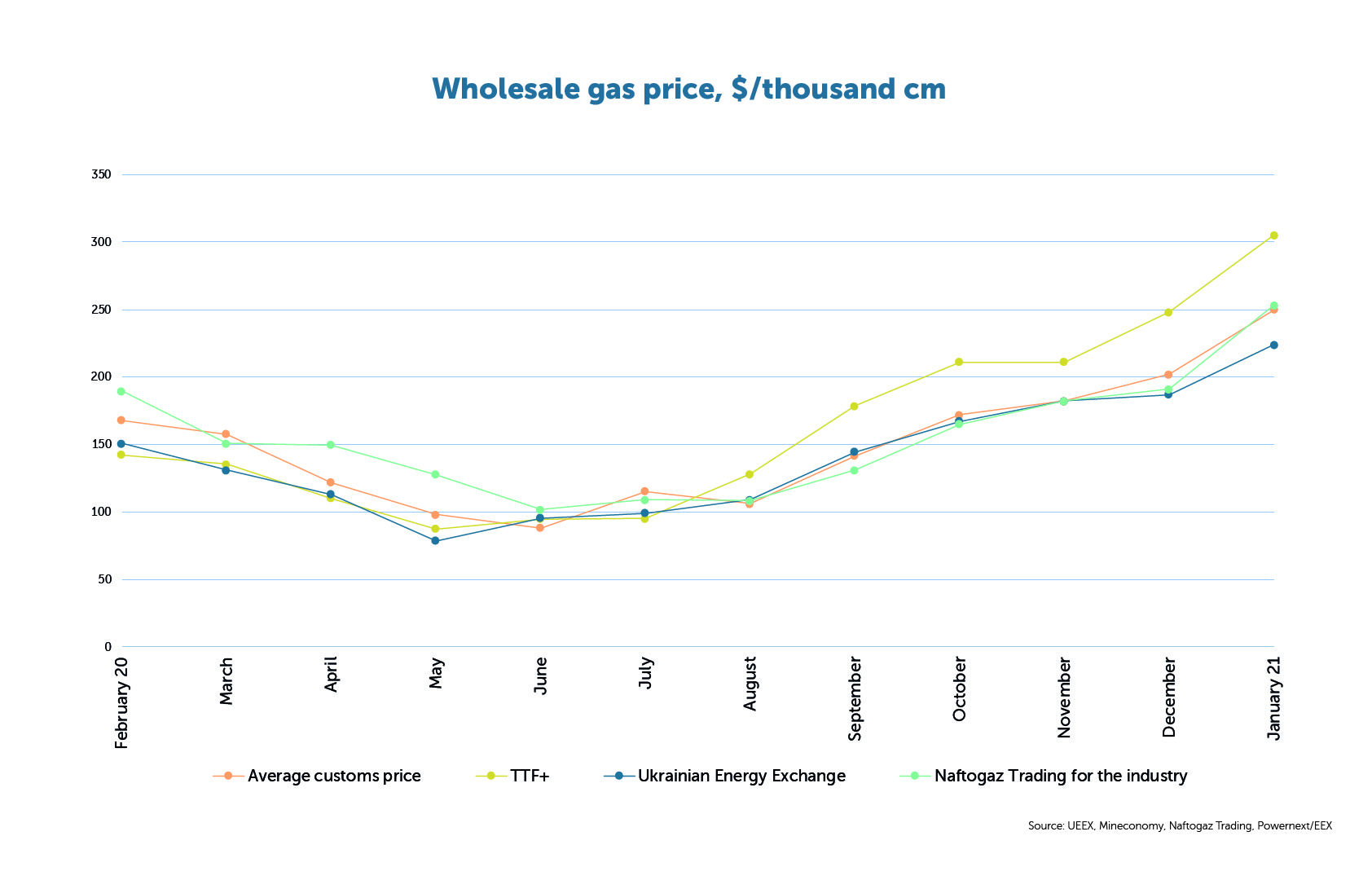 According to the one of the most significant price reporting agency S&P Global Platts, in the first quarter of 2021 there will be a dependence on the use of natural gas from underground storage facilities and gas supplies from Norway, Algeria and Russia to meet growing demand and replace the transition of LNG to Asia. Demand forecasts remain difficult to assess, primarily due to uncertainty about the evolution of the COVID-19 pandemic. At the same time, given the favorable weather, it is likely that demand for natural gas will increase.
Average monthly prices in the first quarter are expected to recover after record lows in 2020. Prices for CO2 emissions in the EU may fall compared to record highs at the beginning of the year.

Price correlation in Ukraine followed the tendency in European hubs and reflected a natural increase in demand and rising prices.
According to the results of e-trading on UEEX in 100% prepayment terms, the weighted average price in January amounted to UAH 6326 ($224) per thousand cubic meters, which is 6% less than in December.

The price of the resource of January in Naftogaz Trading for industrial consumers on the 100% prepayment terms increased by 33% compared to the previous month and amounted to UAH 7139 ($253) per thousand cubic meters net of VAT.

According to the Ministry of Economy, the import of natural gas to the territory of Ukraine in January was carried out at the average price of UAH 7044 ($250), which is 24% more than in the previous month.

According to the Association of Gas Producers of Ukraine, 29 drilling rigs were used in drilling in our country during January, which is 3 pcs. more than in December.

In Europe, in the first month of 2021, 69 active drilling rigs were recorded, which is 4% less than in December. The vast majority of countries remain unchanged, but the country that showed a decrease was Norway (-2 pcs.). And the only country that has increased the number of rigs is the Pcs. ed Kingdom, which has put into operation 2 additional drilling rigs at offshore (which resulted in growth of over 40%). 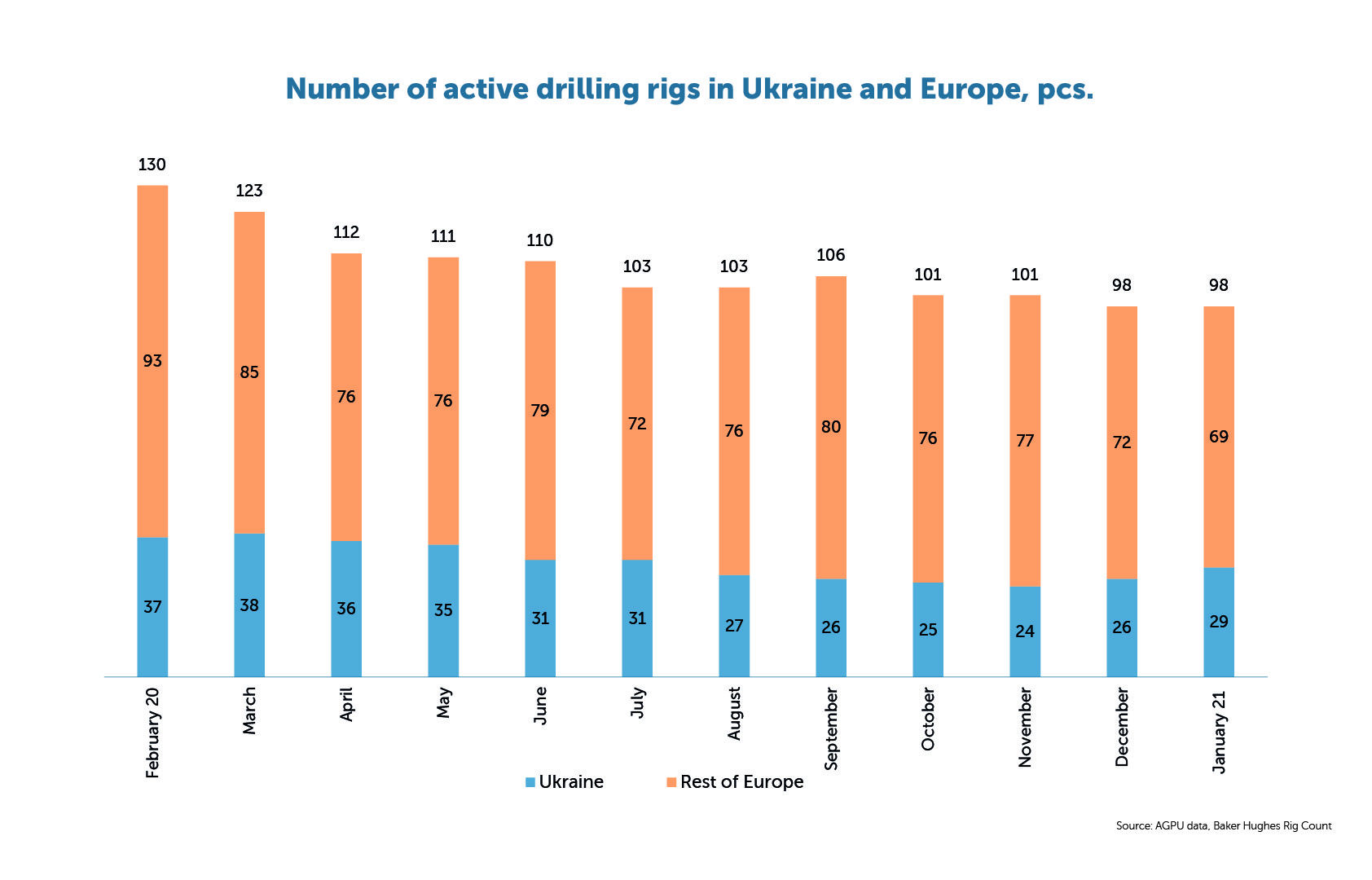 Optimistic forecasts for 2021 to increase drilling volumes are facing a harsh reality, because due to the pandemic, there is a possibility of too slow recovery of prices and global demand.

According to Baker Hughes Rig Count, the total number of active drilling rigs in the world at the end of January was 1211 pcs., which is 10% more than in December and 42% less than the same period last year.

Compared to January 2020, the Pcs. ed States and Canada reduced their activity by 57% and increased by 27% (97 pcs.) compared to the previous month, which unequivocally shows the pace of moderate recovery in the market after a record decline last year. By the way, Canada began to increase drilling and had 68 pcs. (+71%) more active drilling rigs than in December 2020. In total, 156 pcs. were used in Canada, among which it was increased by 4 pcs. (+195%) installations for direct drilling, by 58 pcs. (+67%) - for horizontal and 1 pc. (+50%) - for vertical.

Drilling of new wells in the Pcs. ed States increased by 10% during the month and involved an average of 374 machines in production.

The only country in Africa that has increased investment in drilling is Angola (+1 pc.). The leader of the region - Algeria reduced active drilling by 14% (-3 pcs.). In total, 51 drilling rigs were used in January on the continent, which is 14% less than in the previous month and 54% less than in January 2020. 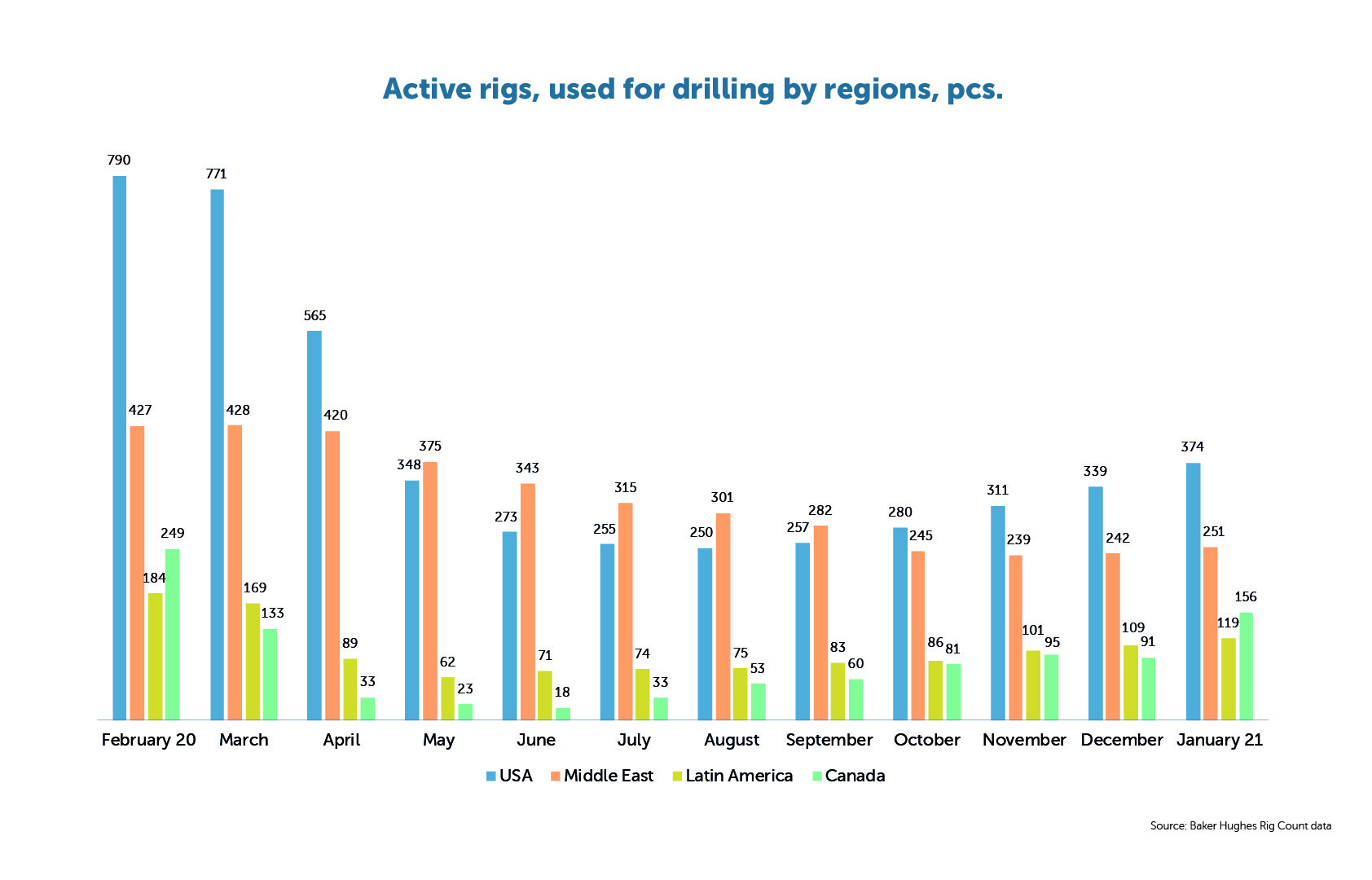 Latin American countries showed a trend of moderate growth, in January they increased the number of active drilling rigs by 10 pcs. (+ 9%). Mexico and Guyana showed the largest increases of 15% and 50%, respectively.

Rising gas prices increase drilling, but it is too early to attract significant capital investment, as global companies understand that this is a matter of demand, which will undoubtedly decrease at the end of the heating season and cold temperatures.

A meeting between The Prime Minister of Ukraine Denys Shmyhal, Investors and Interdepartmental Commi...