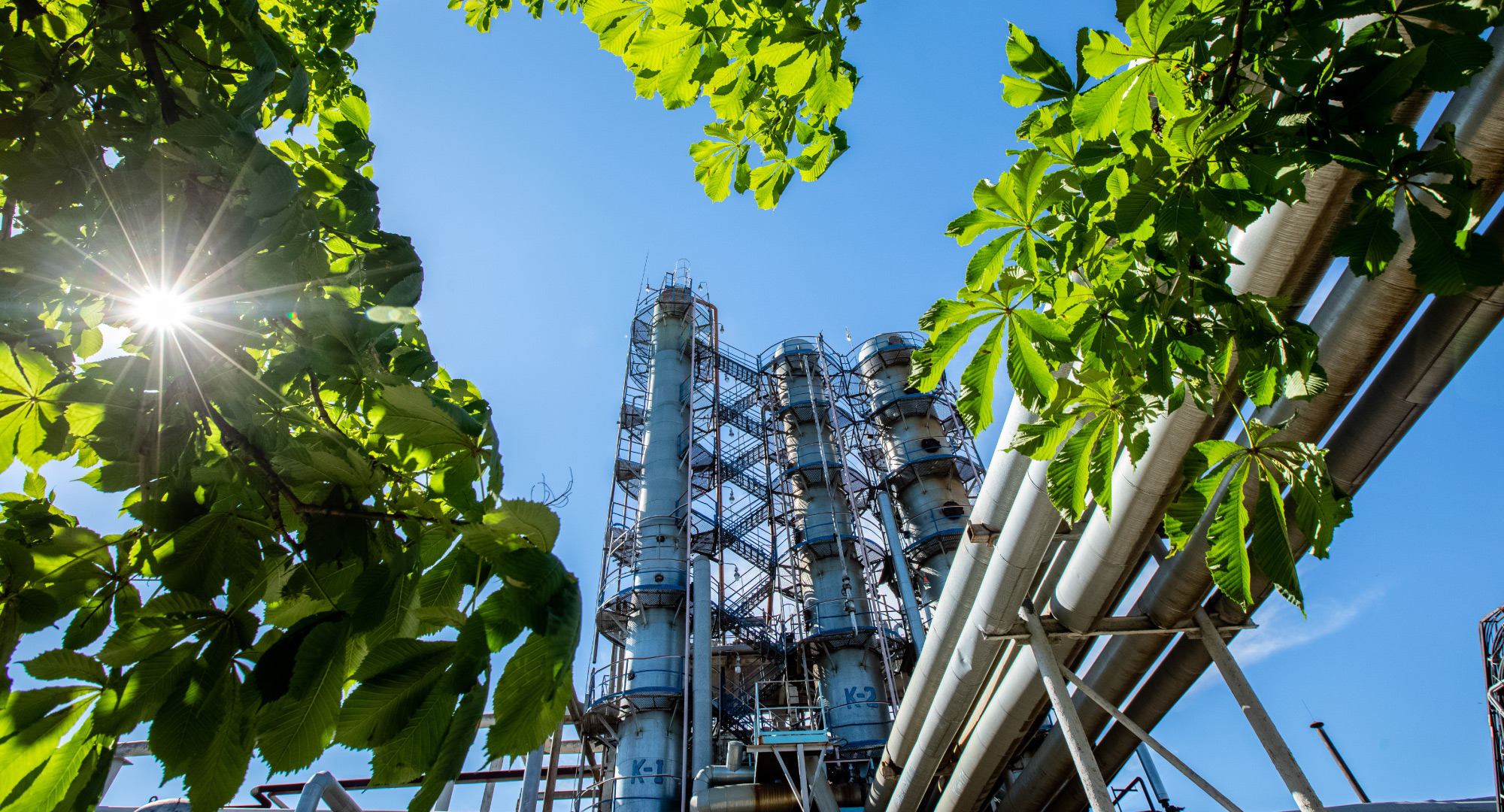 JSC Ukrgasvydobuvannya (Naftogaz Group) reduced gas production by 4% compared to the same period last year. PJSC Ukrnafta along with independent gas producers were able to increase outputs of natural gas by 6% and 4% accordingly.

Thus, the share of state-owned enterprises in the total amount of gas production in August was 75%, independent companies – 25%, which entails no changes since the previous month. 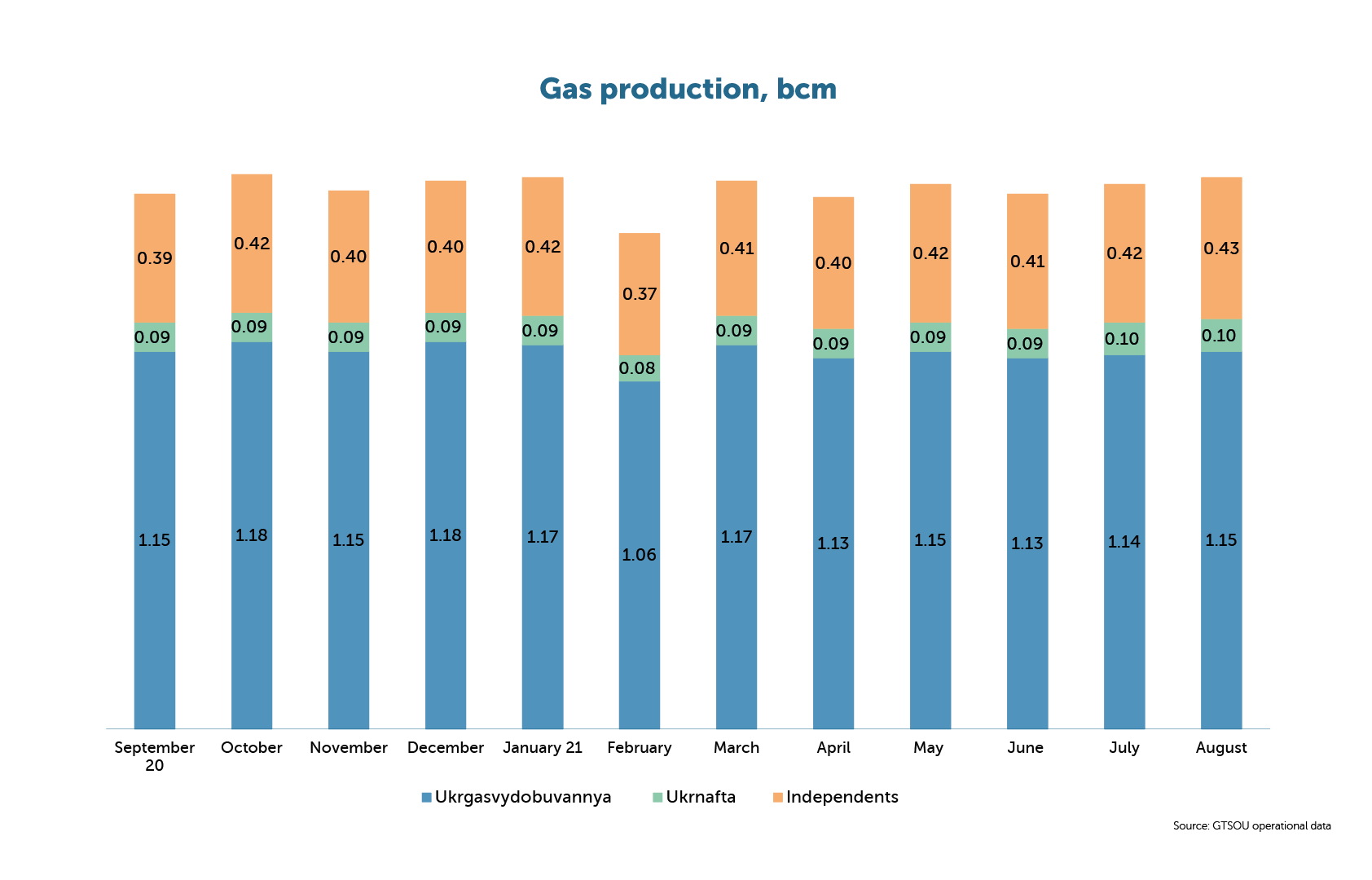 Among the main reasons caused the biggest consequences on the market: 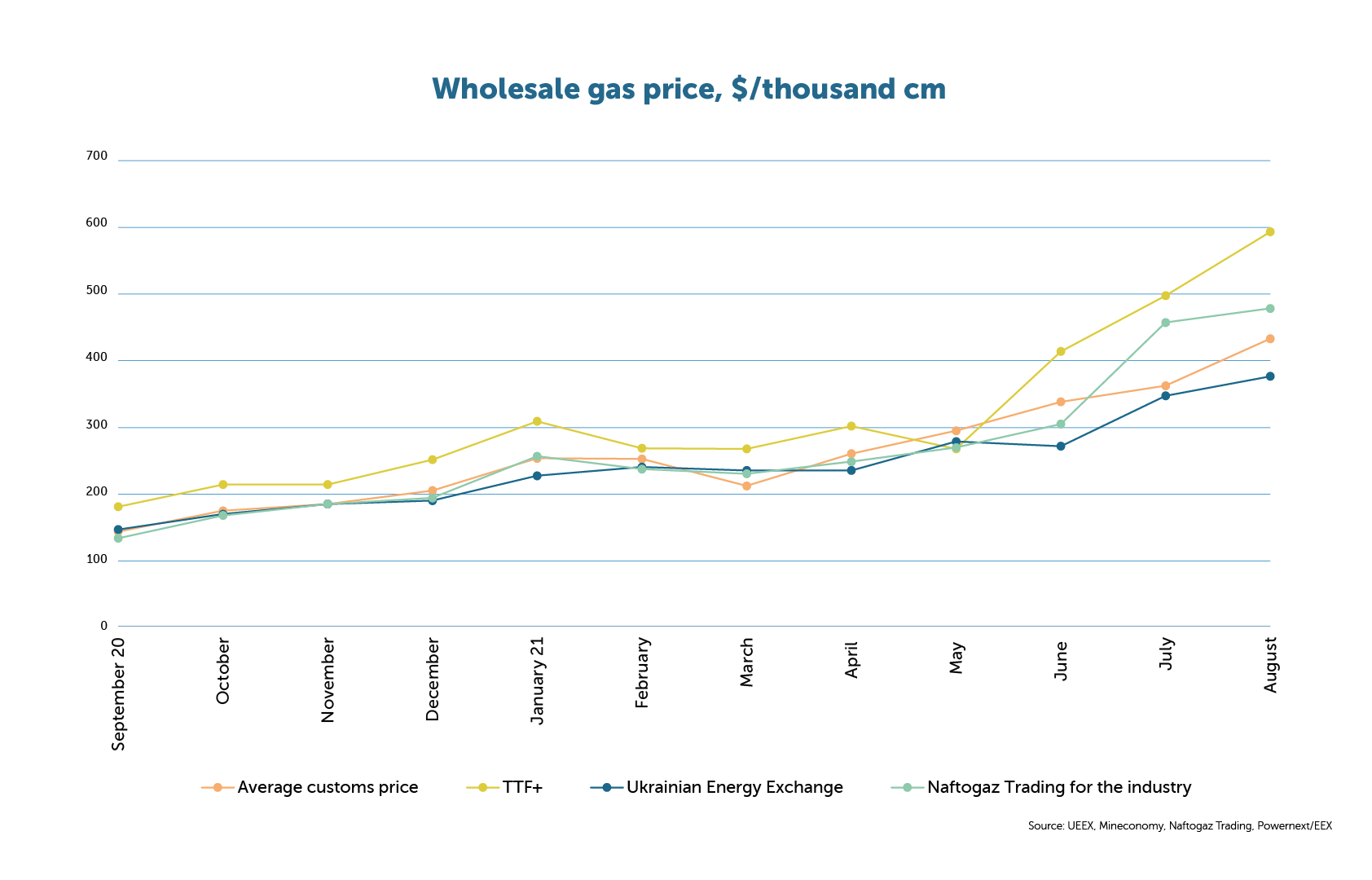 August 2021 was marked by a number of significant events that had a profound effect on pricing, as countries around the globe are preparing for the heating season, accelerating the pace of filling UGS. However, the situation in the hydrocarbon market in unprecedented, as high prices lead to a deficit. Asia, which needs more resources as it grows its economic potential, encourages traders from the United States to redirect LNG flows from Europe to themselves. According to Reuters, seasonal spot prices in Asia have reached historic highs since 2013. On the other hand, weather and post-epidemiological reasons during the summer led to a “demand boom”.

Rising resource demand in Latin America due to the impact of drought on Brazilian hydropower, air conditioning coverage in Bangladesh and Pakistan, and the replenishment of underground storage facilities since the start of the pumping season has reopened the market where players are willing to buy hydrocarbons at higher prices.

Price correlation in Ukraine during August followed the upward trend at European hubs and reflected rapid growth, even though they were still lower if it is compared.

The price of the resource of August in Naftogaz Trading for industrial consumers on the 100% prepayment terms, increased by 3% to the previous month and amounted UAH 12 658 ($473 per 1 000 cm) net of VAT.

According to the Ministry of Economy, the import of natural gas to the territory of Ukraine in August was carried out at the average price of UAH 11 457 ($428 per 1 000 cm) net of VAT, which is 18% higher compared to the previous month.

According to the Association of Gas Producers of Ukraine, 35 drilling rigs were used in drilling in our country in August, which is 3 pcs. (+9%) more that the previous month, and by 12 pcs. (+52%) more than the same period last year. 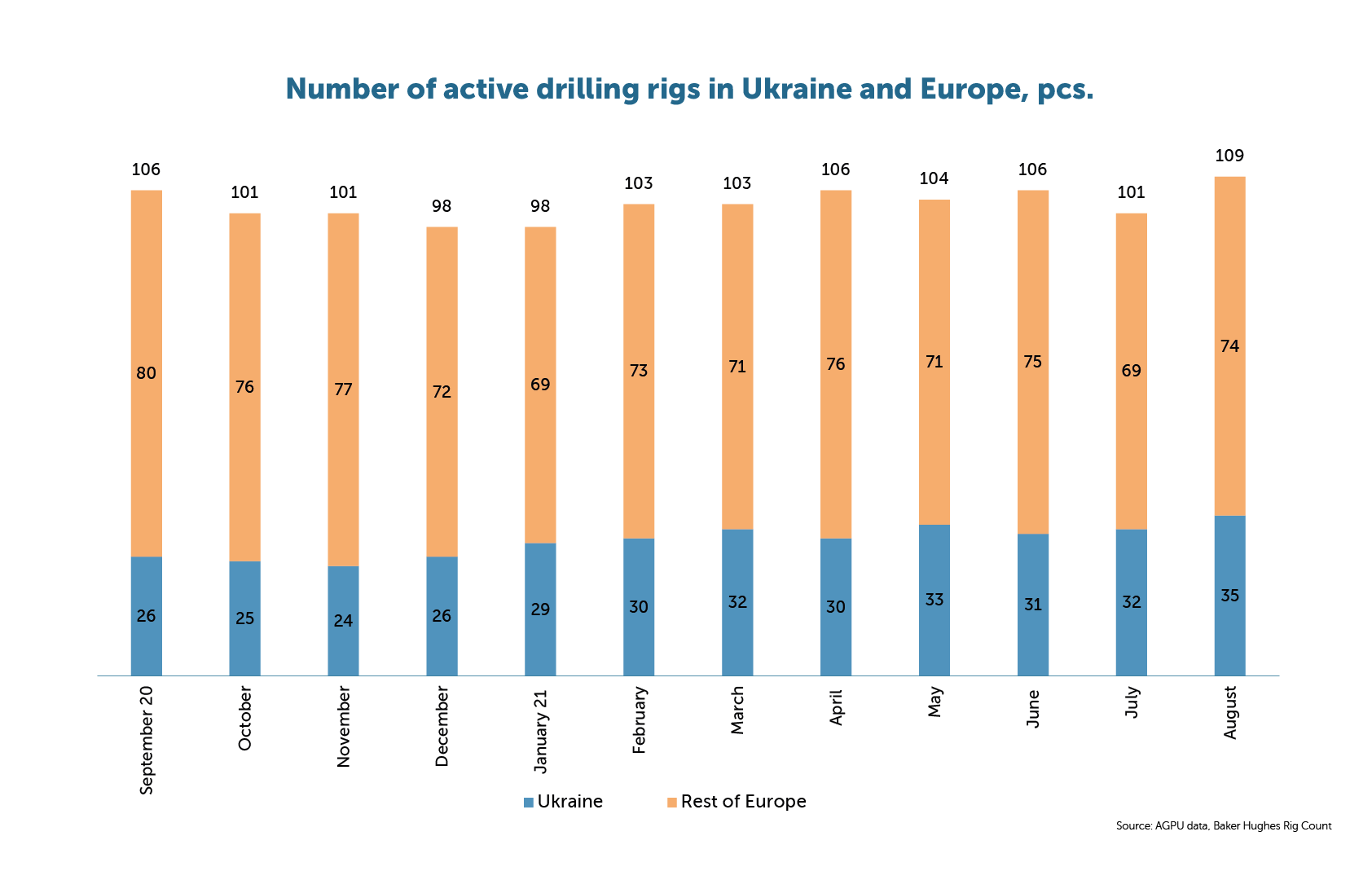 According to Baker Hughes Rig Count, the total number of active drilling rigs in the world in August amounted to 1 438 pcs, which is 56 pcs. (+4%) more, compared to the previous month, and by 398 pcs. (+38%) compared to the analogical period last year.

Canada in also enlarging a volume of capital investment in the industry. Hence, the country involved an additional 11 active drilling rigs (+7%), and altogether showed a number of 156 pcs. Comparing to the same period of the last yeast, Canada demonstrates an increase of 103 pcs. (+195%). The following methods were used in drilling: directional – 4 pcs (no changes), horizontal – 148 pcs. (+8%), vertical – 3 pcs. (+15%).

The number of rigs involved in drilling in Africa is growing for the seventh month in a row. Their number was increased by 7 pcs. (+10%) to the previous month and by 13 pcs. (+21%) compared to the same period last year. The leader of the region in terms of capital investment in the industry – Algeria – managed to increase drilling by the equivalent of 3 pcs. (+14%). Countries where growth is recorded: Côte d’Ivoire by 1 pc., Nigeria by 4 pcs. (+57%) and Senegal by 1 pc. Countries, where on contrary, recorded a reduction: Ghana by 1 pc. (-50%) and Libya by 1 pc. (-7%). The rest of the countries remained unchanged. 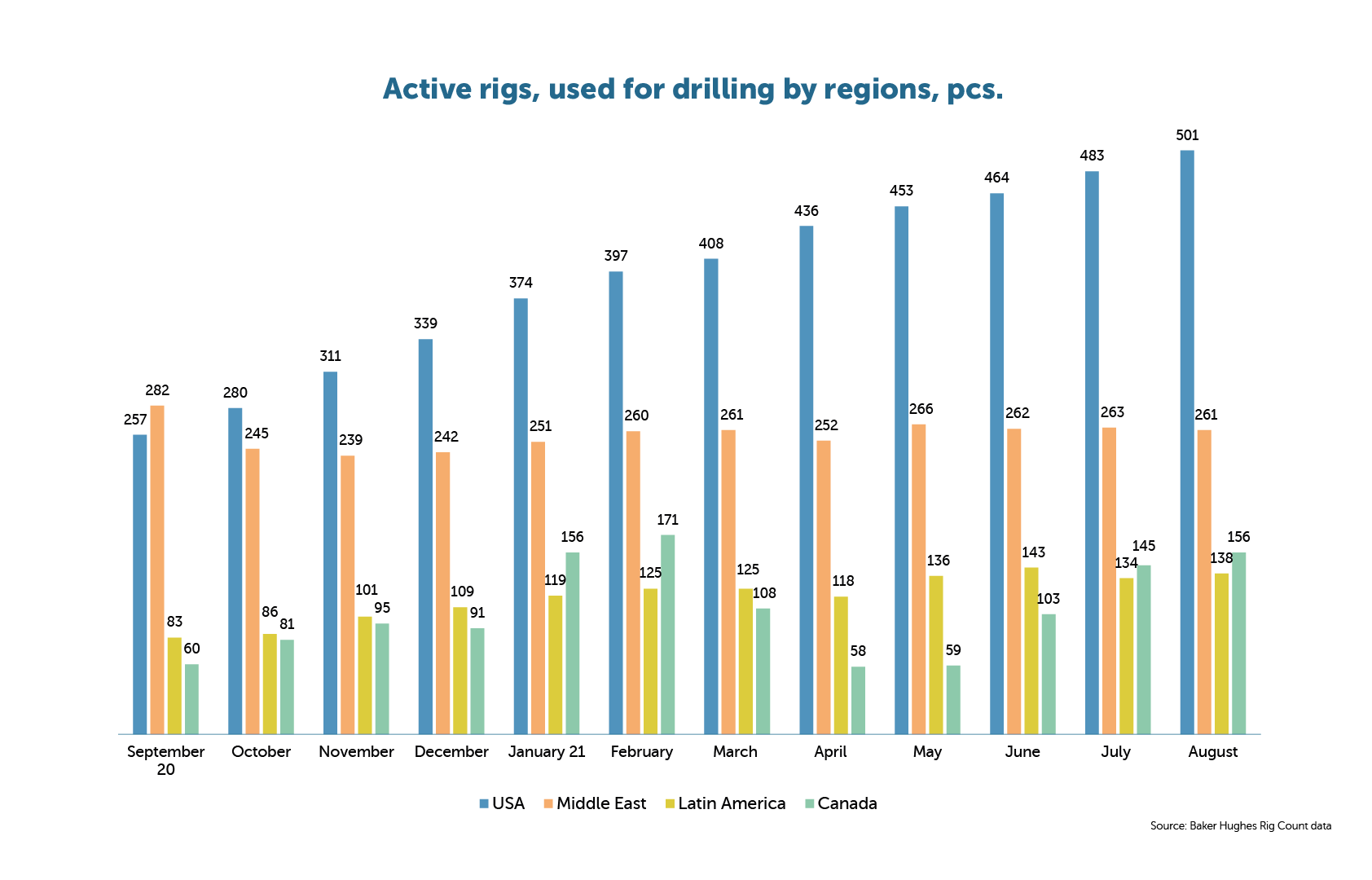 The Middle East continues to stagnate with insignificant fluctuations for the region, where a total of 261 drilling rigs were involved, which is 2 pcs. (-1%) less compared to the previous month, and by 40 pcs. (-13%) compared to August 2020. Countries where drilling volumes have increased: Kuwait by 2 pcs. (+8%), Qatar by 1 pc. (+8%), Saudi Arabia by 1 pc. (+2%). The only country where the decrease was recorded was UAE (Abu Dhabi) by 6 pcs. (-14%). The rest of the countries remained unchanged.