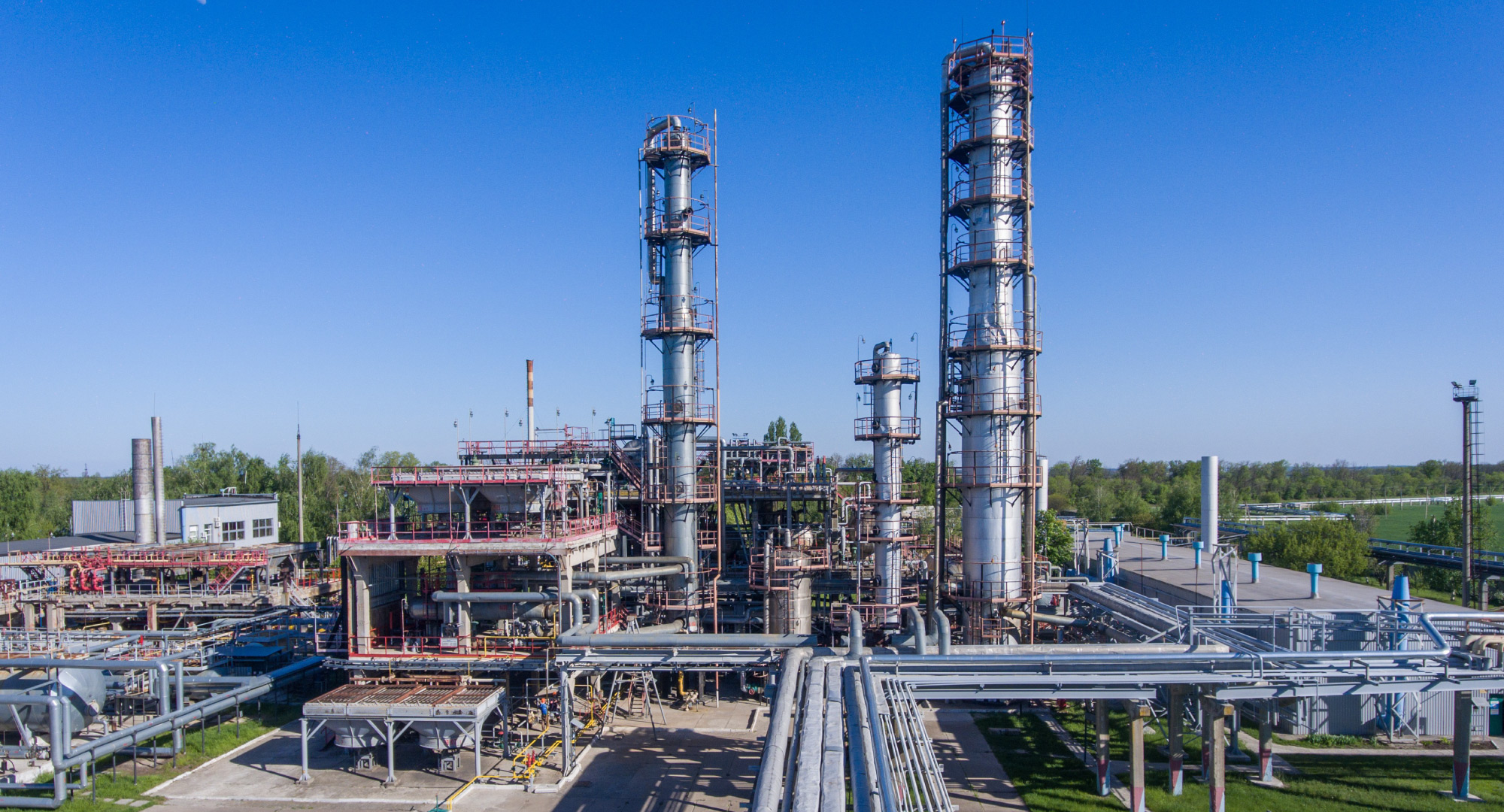 Hence, the share of state-owned enterprises in the total amount of gas production in April was 75.4%, independent enterprises - 24.6%. 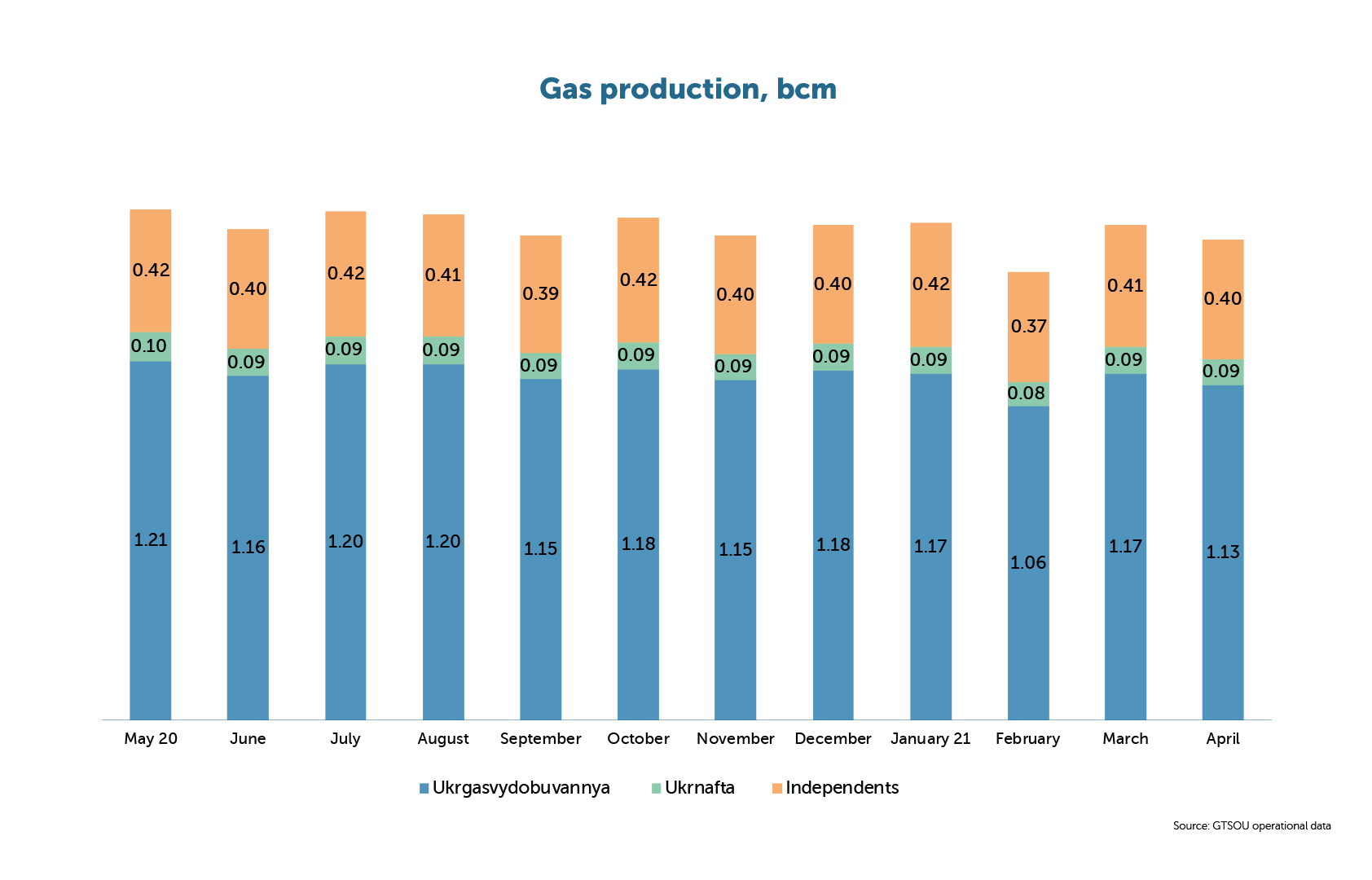 The average price at the TTF hub, including the cost of transportation to Ukrainian border, amounted to UAH 8443 ($302 per 1000 cm) excluding VAT. It increased by almost 15% compared to March 2021.

Among the main reasons that had a positive effect on pricing: 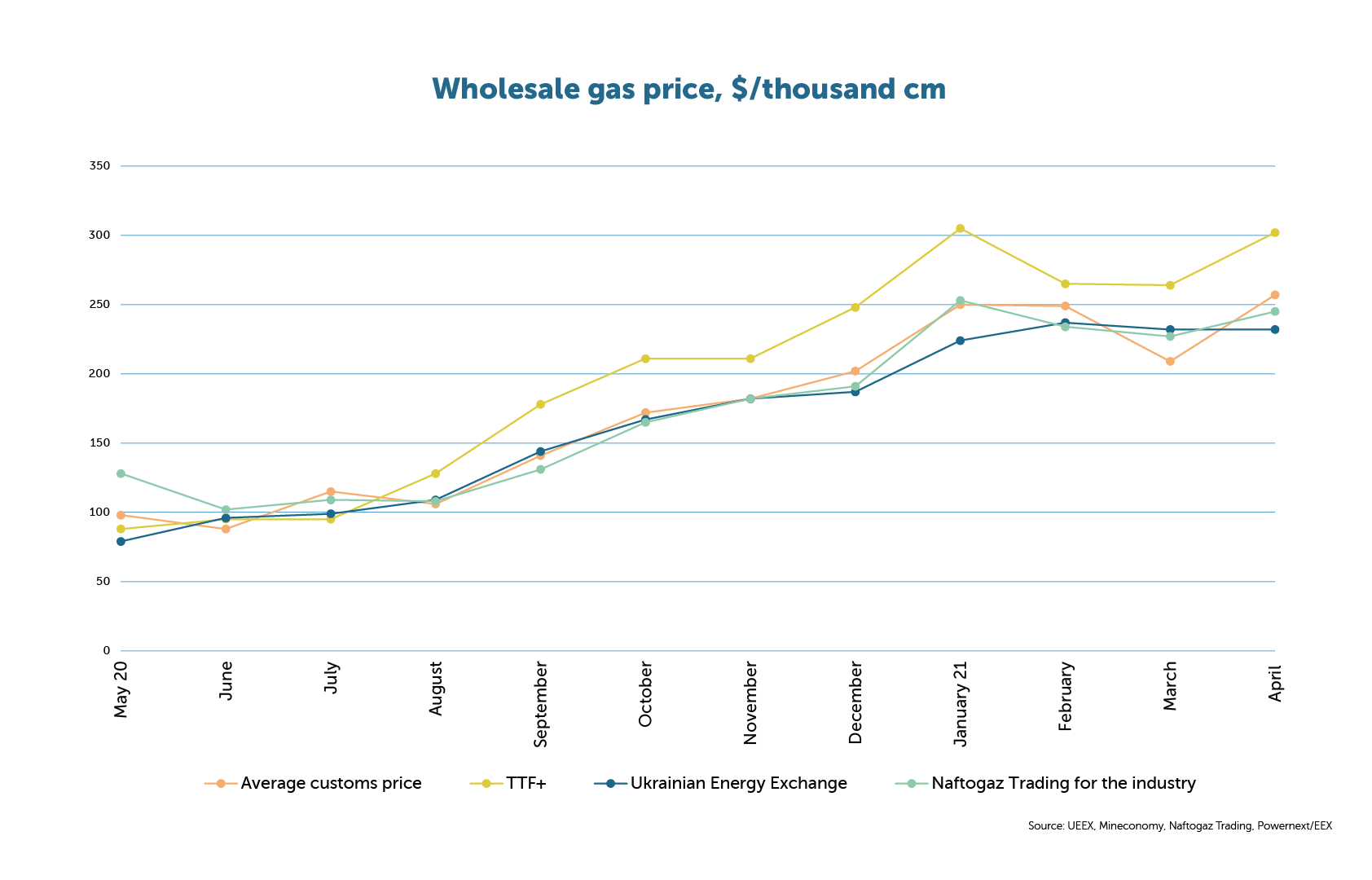 The most significant reason that led to the fall in prices was an error in the nominations from the Slovak GTS Operator Eustream, as the volume of gas transit to Ukraine on the trading day on April 24 was doubled, which caused the price to fall by 8%. However, it later emerged that incorrect nominations had been submitted by the customer for transportation services and the problem was resolved.

The increase in the cost of hydrocarbons has become a major prerequisite for improving the financial position of the world's oil and gas giants. As a result, ExxonMobil, Royal Dutch Shell, Total and BP made more profit than planned in the first quarter and so on. Financial strengthening of companies after an unprecedented level of losses last year will help to continue investment activities. According to Bloomberg, ExxonMobil shares are the most successful among supermajors this year and provide a return of 44% (Chevron's closest competitor with 27%). The company made a profit for the first time since 2019 precisely because of the rising cost of hydrocarbons. Despite this, ExxonMobil found itself in an awkward position, primarily due to the decision not to cut payments last year, as, for example, did Shell and BP. As a result, the level of loans increased by 40% to $ 70 billion. The main task for the company is to combine debt repayment, investing in key projects in Guyana and the Permian Basin, as well as increasing shareholder demand for repayment. To meet these needs, jobs have been cut, a plan with large investments has been postponed, and capital spending has been announced to be reduced by $ 10 billion a year by the middle of this decade.
Oil and gas companies' policies and strategies for dealing with the crisis are different, and the consequences and continuation of the COVID-19 pandemic are unpredictable. However, increasing consumption today is a prerequisite for a natural increase in the cost of hydrocarbons in the world tomorrow. In the absence of repeated waves of morbidity, the industry is expected to gradually resume business activity.

Price correlation in Ukraine repeated the trend in European hubs and reflected a natural increase.

Hence, according to the results of e-trading on UEEX in 100% prepayment terms, the weighted average price in April amounted to UAH 6479 ($232) per 1000 cm net of VAT, which is 0.3% more than the previous month and by 100% more compared to the same period last year.

The price of the resource of April in Naftogaz Trading for industrial consumers on the 100% prepayment terms increased by 9% compared to the previous month and amounted to UAH 6853 ($245) per 1000 cm net of VAT.

According to the Ministry of Economy, the import of natural gas to the territory of Ukraine in April was carried out at the average price of UAH 7178 ($257) per 1000 m3 net of VAT, which is 23% more than in the previous month.

According to the Association of Gas Producers of Ukraine, 30 drilling rigs were used in drilling in our country in April, which is 2 pcs. (-6%) less than in March. The slight decrease is due to an increase in workovers performance. 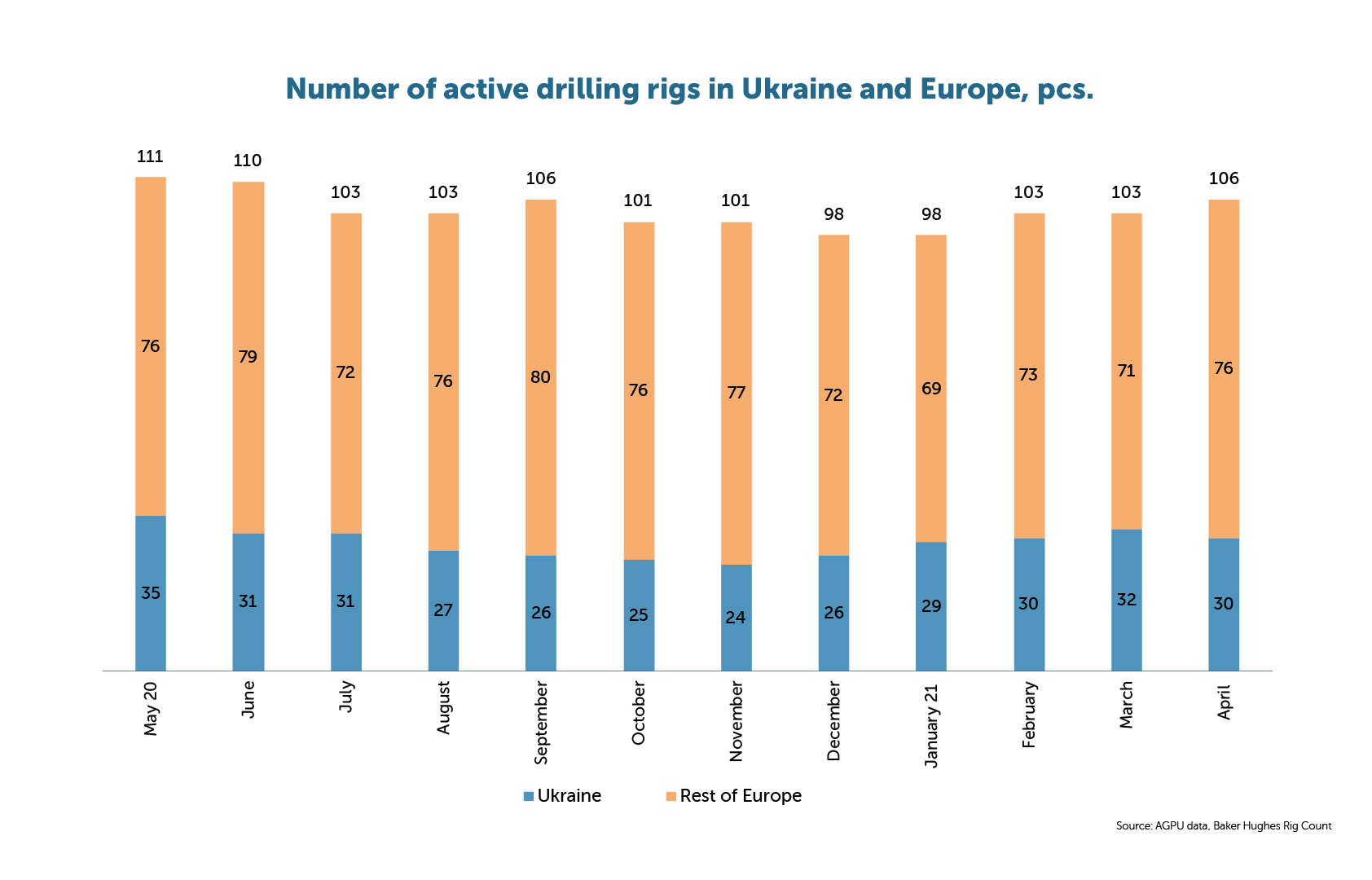 Africa, after increasing drilling volumes over the past few months, is in a state of stagnation with a slight increase by 2 pcs. (+3%). Thus, in April, 61 pcs. were recorded in the region, which despite the increase to the previous month is still a decrease of more than 42 pcs. (-41%). Algeria has become a country that is improving for the fourth month in a row. The country, growing by 2 pcs. (+8%) in April used 25 drilling rigs, which is 15 pcs. less. (-36%) for the same period last year. Ghana also managed to increase the figures by 1 pc. (+100%). Nigeria, in turn, was the only country to reduce drilling by 1 drilling rig (-17%), showing a negative trend for the second month in a row. The rest of the countries remained unchanged. 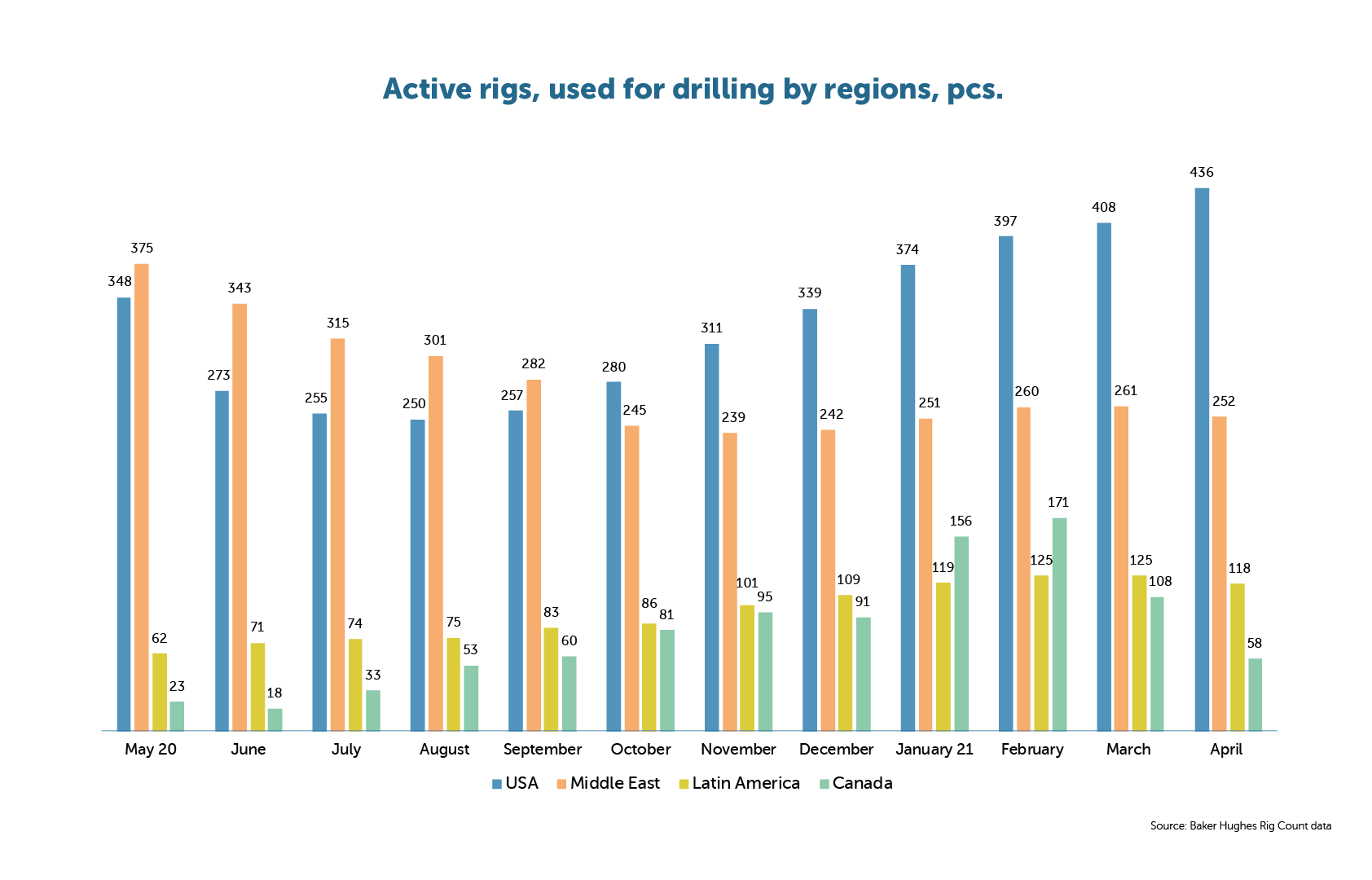 Against the background of a sharp rise in prices, drilling activity is expected to increase, however, bearing in mind the time frame of the drilling cycle and the instability with the COVID-19 pandemic, it is too early to talk about significant investment in drilling.

Association's news
Naftogaz Suppliers’ Day will be held on 9 July

We invite Ukrainian and international suppliers of goods and services to participate in the event. ...

Zakhidnadraservis joined the Association of Gas Producers of Ukraine

Zakhidnadraservis Group became the 9th member of the Association of Gas Producers of Ukraine. Offici...

The Executive Director of the Association Artem Petrenko took part in the VIII International Oil and...

Newfolk OGCC LLC is holding the main oil and gas event of Ukraine this Spring. ...